Wissahickon Style XII, or the Mystery of the Bicolored Shutters 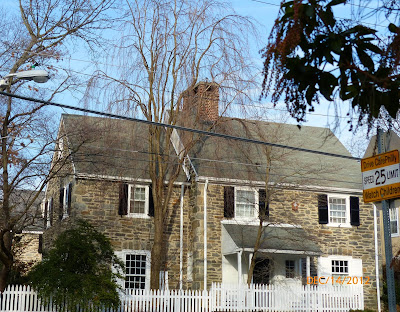 One morning, as I was walking the dogs, I noticed a house along our route, a Wissahickon Schist Neocolonial house with white shutters around the windows on its first floor and black shutters around its windows on the second floor. "How odd, " I thought, "...though not unattractive." 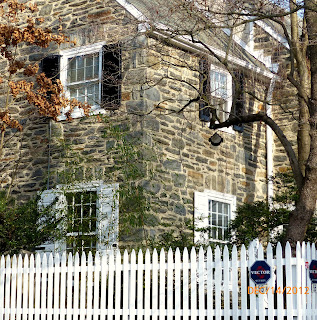 Another morning, sleepily looking out the window during my morning commute, I noticed another house, again Wissahickon Schist Neocolonial, with the same sort of shutters. "How not so odd this time," I thought," ... perhaps a style?" 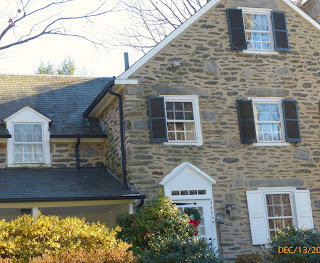 The owners of this house were outside putting up Christmas decorations when I stopped to take a pic,  and were happy to talk about their house, which was built in the 1920s, had only had three owners, and had its shutters as pictured above when they bought it over 30 years ago. The also knew of the two other nearby houses with the same shutter configuration.  Thus this one... 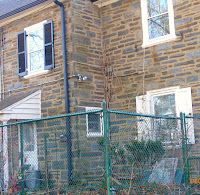 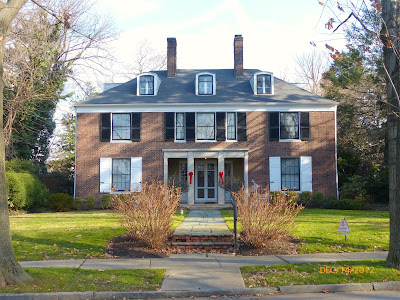 Growing up in New York City and Long Island and educated in New England, I had never seen houses with different colored shutters before. But a little digging surfaced the fact that Elizabeth Pennell, an olde-timey Philadelphian, had. As she noted in her book, Our Philadelphia, published in 1914.

"If I walked up Spruce Street, or as far as Pine and up Pine, silence and peace enfolded me. Peace, breathed, exuded from the red brick houses with their white marble steps, their white shutters below and green above, their pleasant line of trees shading the red brick pavement."

So here is  evidence of white shutters below, darker shutters above, though in this case green, not black. And since these words are reminiscences of childhood, we're talking 19th century--well before all the above 20th century houses were built. 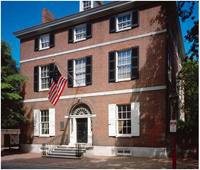 But had I really never seen this design before? Or had I seen it but not really looked? What about Philadelphia's many historical houses?

And according to the Historic American Buildings Survey for New Castle, Delaware,--


"Row Houses on Strand --...The green blinds above and white shutters below are as usual. The green door blinds were common a generation ago, but there is a tendency at present to eliminate them.”

These row houses were built in the 1820s-30s. And if one dips into Looney's book and looks at early photos of the city, it's easy to find examples of different shutter configurations--sometimes solid, often dark above light, but even occasionally light above dark.

So here is a conjecture. Perhaps when shutters were a necessity for keeping out wind and not just a useless appendage which improves the appearance of older houses, people were less fussy about how they looked. So that out of  a hodge-podge of practical options, preferences grew for configurations that did more than just keeping the wind out. 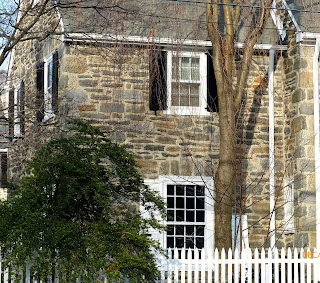 The owners of this house said that they heard that the reason for shutters like this was because the social rooms were all on the first floor, and that if the shutters had to be closed at least they could still reflect light. While the shutters on the second floor were outside bedrooms, which were better kept dark. 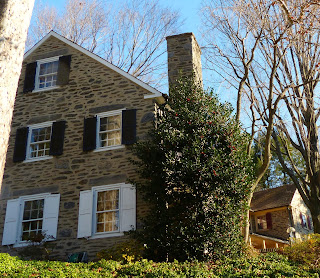 The owners of this house said it was because it was easier to wash the windows on the first floor, so a light color could be kept clean, which was harder to do on higher floors.

I still have more work to do researching this. While I did turn up what looked to be a description of shutters like these in a New York newspaper from 1878, the text was to blurry for me to confirm this.

This looks to be a Mid-Atlantic tradition that leaves me with a lot of unanswered questions, questions I will follow up on. So there may well be a second part to this post at some point.


Till then--please enjoy an on-theme Cole Porter song, as sung by Bobby Short.


"That Black n White Baby of Mine"