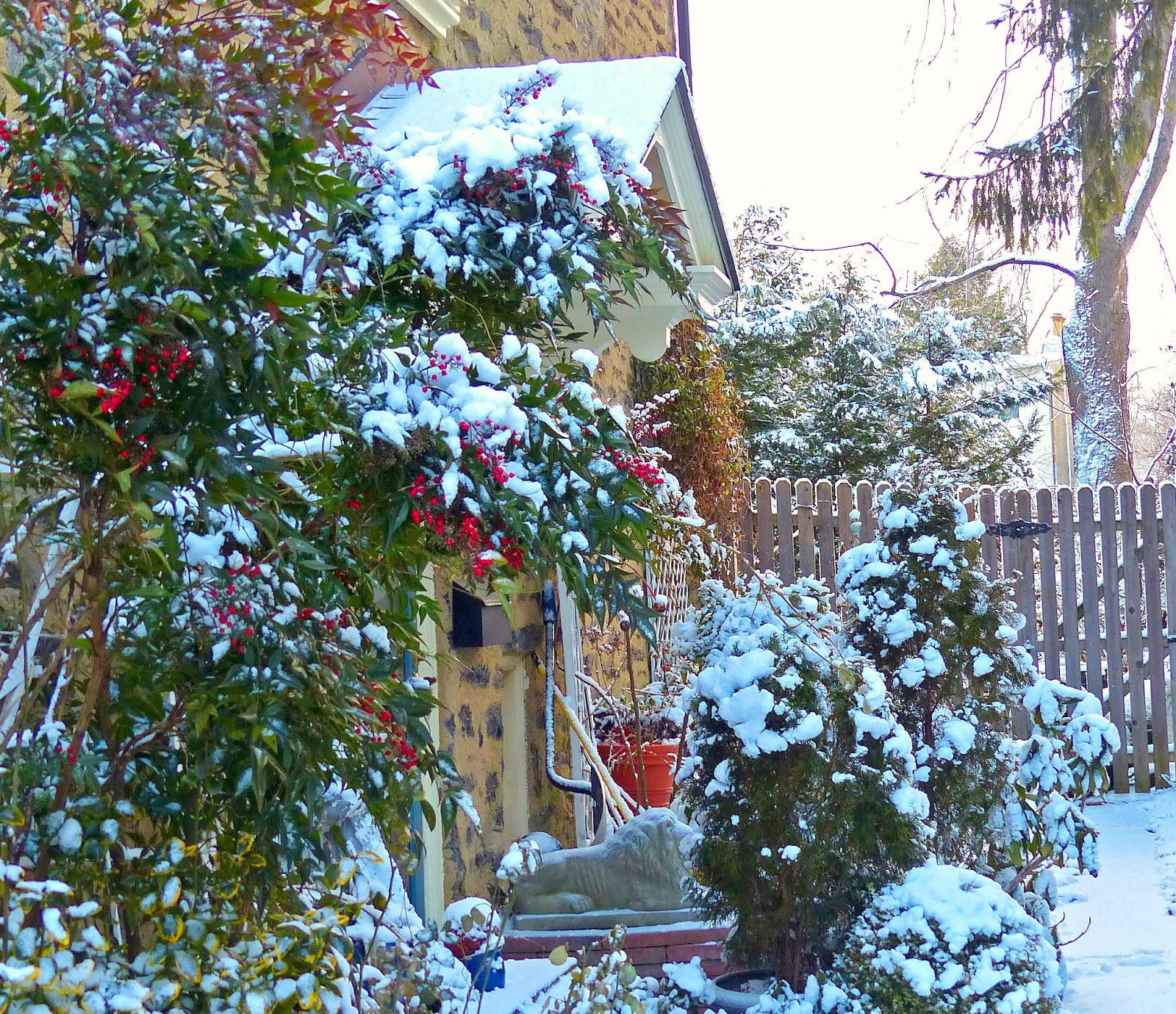 I am ready for spring, being uninspired on present garden matters, so this post will be a grab bag of incidentals.

Wouldn't it be wonderful if we had something like a simple interdenominational chapel in the Wissahickon? Something like this--

I'm going thru some old photos and found this shot of my garden in spring. This is what I am longing for. 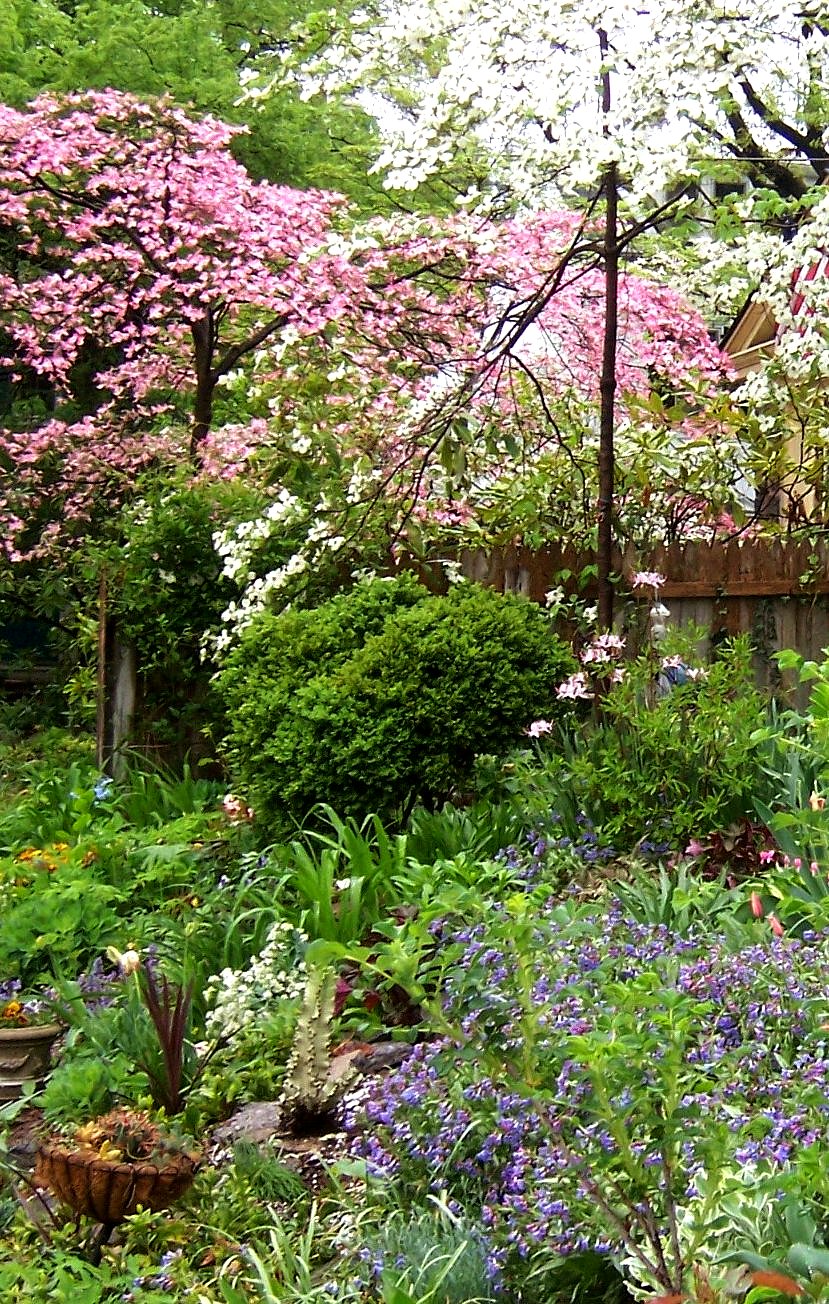 And if I can't have that---I'd like to be here (another old photo, pre-digital Anguilla.) 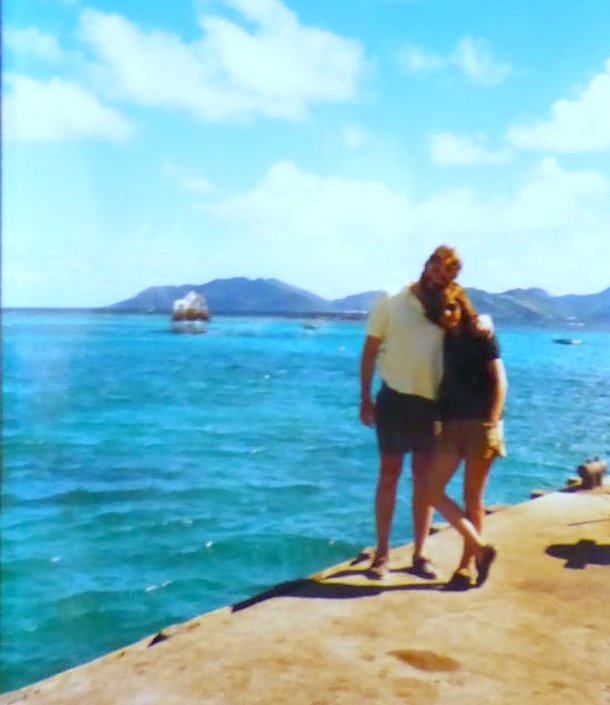 But things are not really grim. The old wisdom of having Heavenly Bamboo (Nandina domestica -- not the regular bamboo) by the door does pay off. 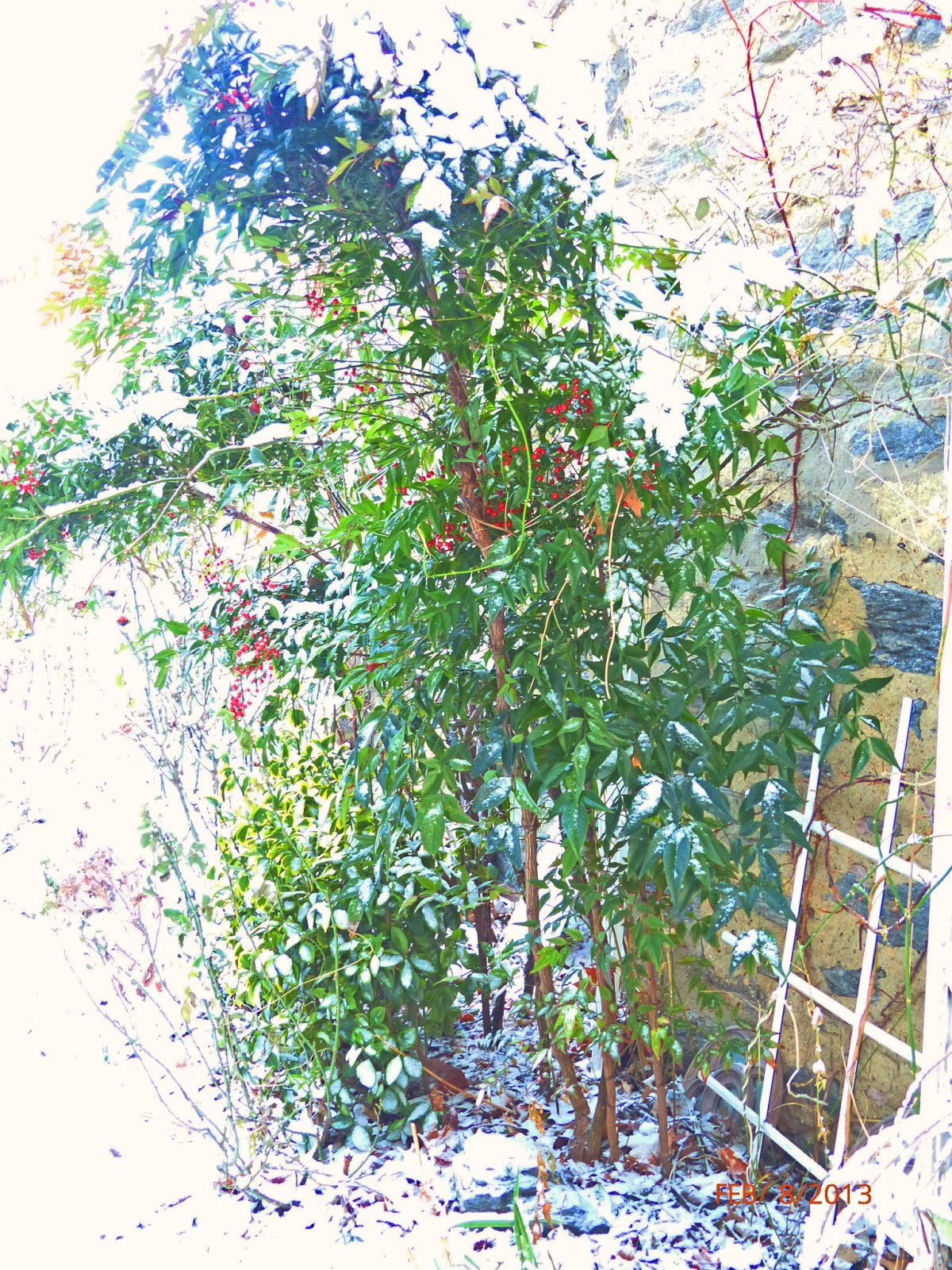 Evergreen, with red berries in winter and sorta meh off-white flowers in summer, it takes some shade and grows everywhere but in sandy soils. And while it spreads, it spreads slowly and controllably here. In the South it can be invasive but up North it is fine. It is one of those great background plants that lacks dramatic flowers but has other virtues. There are many fancier varieties than what I am showing here, so there is a version for every garden. It comes from Asia and the Japanese do plant it by the front door for luck.

And, on Valentine's Day, the red berries go well with hearts 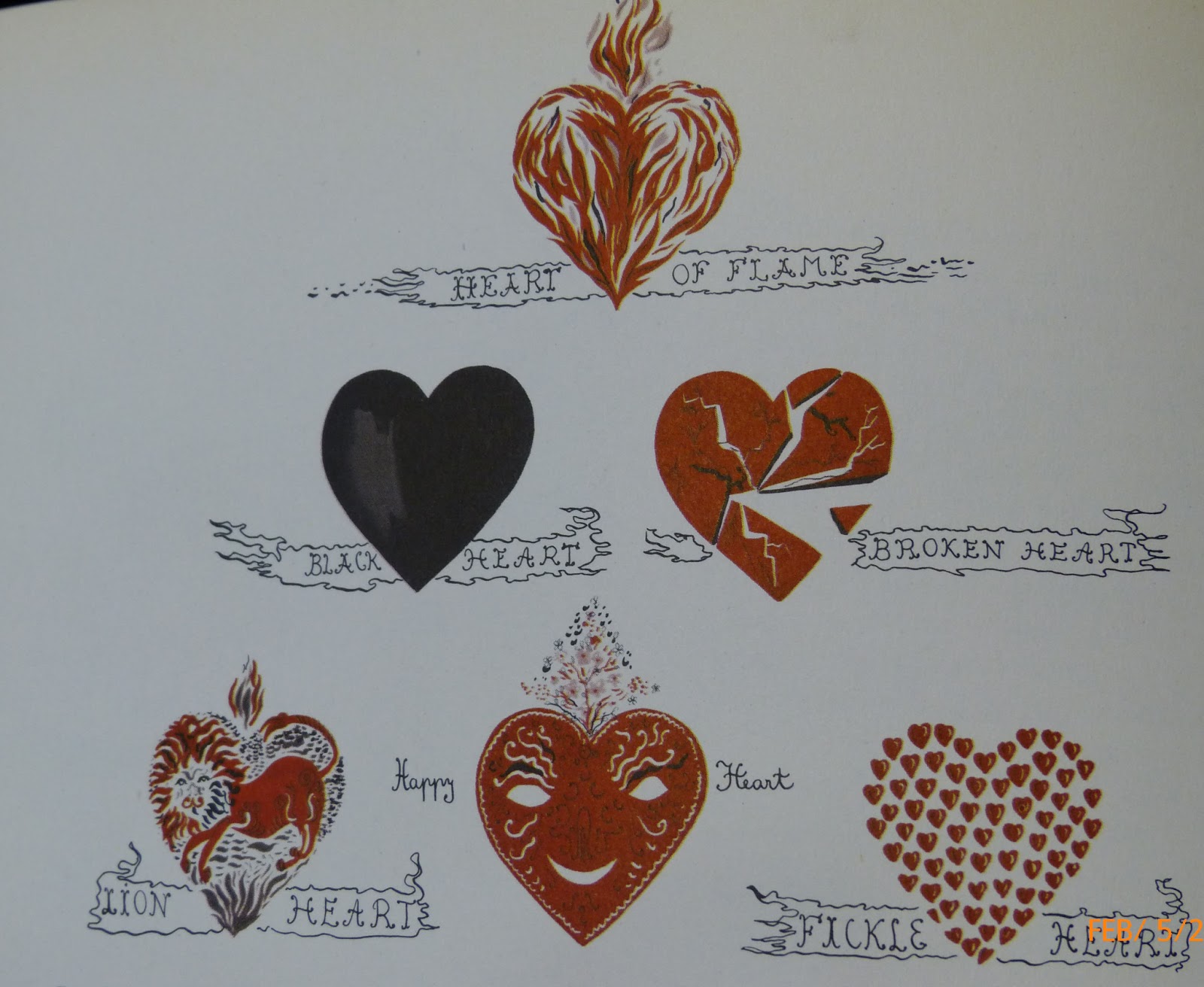 Here is my Valentine. It is from a 50's mag/annual called Flair, put our by a painter called Fleur Cowles, whose gift for sophisticated whimsey delighted my mom--and thru her, me. With Flair Cowles mixed serious with fun without diminishing either. Bless her bright, casual sensibility.

Here is another one of her illustrations: 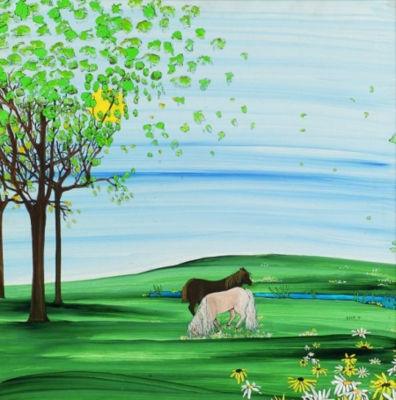 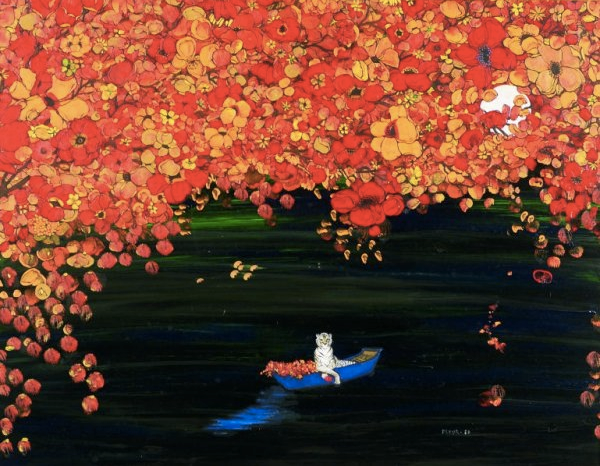 She created new worlds with those animals and flowers, worlds you had never imagined before and which you wanted to imagine more of. This to me is true chic.  People forget that there is such a thing. Fresh, evocative of paradise, sweet and strange at the same time, delicately spare, charming and benign, these are terms not usually associated with chic. I doubt anyone would deny Cowles was chic--but her kind of chic I do not see much around anymore. Is it too difficult? 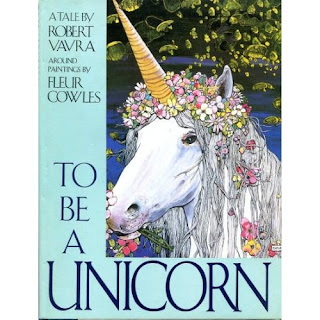 I've spent most of this winter inspired by circa-1815 chic (as channeled through the 1920s.) I've been turning my love and attention onto taking pics of the Free Library that show my vision of the place. It's not quite in the Wissahickon Valley, though close, so I've posted them on my other blog at My Other Blog. 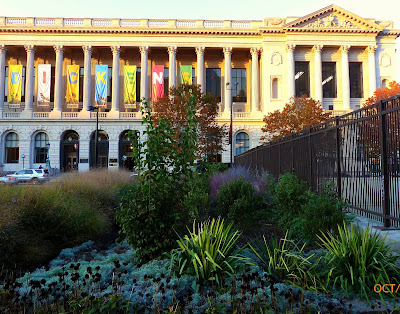 I will probably post a third one soon-- (I am lucky yo have free access to a place that is so much like the Hotel de Crillon. But then, everyone in Philly does.) And then soon the snowdrops that are sticking their blades up through the dirt will turn into scented flowers, and the season of flowering will begin. 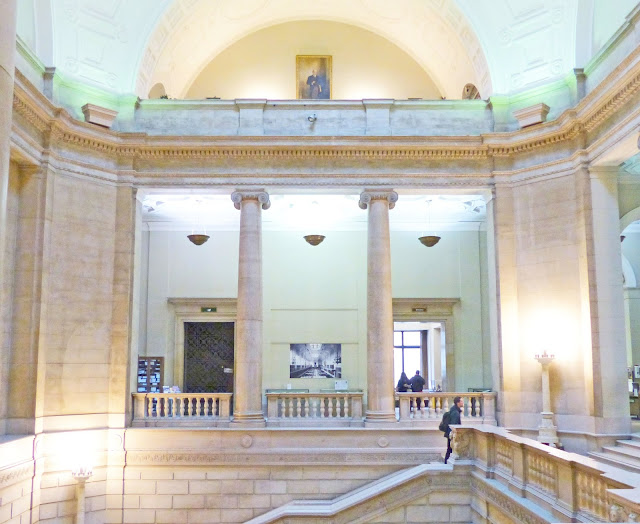