Mycobacterium vaccae or Why Gardening is Good for You 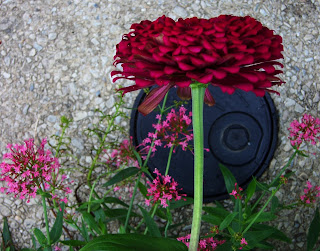 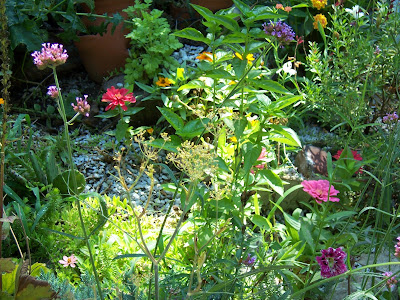 I started this blog for several reason, one of which was to explore how the garden gardens the gardener. I thought it might have to do with smells plants produce. I was half right. It looks like it has to do with the smells the soil produces.
Enter Wikipedia--


"Mycobacterium vaccae is a nonpathogenic species of the Mycobacteriaceae family of bacteria that lives naturally in soil. Its name originates from the Latin word, vacca (cow), since it was first cultured from cow dung in Austria. Research areas being pursued with regard to killed Mycobacterium vaccae vaccine include immunotherapy for allergic asthma, cancer, depression, leprosy,] psoriasis, dermatitis, eczema and tuberculosis.

There are scientists who believe that exposure to Mycobacterium vaccae may work as an antidepressant because it stimulates the generation of serotonin and norepinephrine in the brain. More specifically, it induces the neurogenesis of neurons that produce those two compounds...

Research, as of 24 May 2010, has shown that when Mycobacterium vaccae was injected into mice, it stimulated some growth of neurons. It also increased levels of serotonin an decreased levels of anxiety. "We found that mice that were fed live M. vaccae navigated the maze twice as fast and with less demonstrated anxiety behaviors as control mice", says Dorothy Matthews of The Sage Colleges in Troy, New York, who conducted the research with her colleague Susan Jenks."

Well Holy Cow! Skeptical of Wikipedia? How about The Economist, Apr 4th 2007?

“BACTERIA cause disease. The idea that they might also prevent disease is counterintuitive. Yet that is the hypothesis Chris Lowry, of Bristol University, and his colleagues are putting forward in Neuroscience. They think a particular sort of bacterium might alleviate clinical depression

The chance observation that Dr Lowry followed up to arrive at this conclusion was made by Mary O'Brien, an oncologist at the Royal Marsden Hospital in London. Dr O'Brien was trying out an experimental treatment for lung cancer that involved inoculating patients with Mycobacterium vaccae. This is a harmless relative of the bugs that cause tuberculosis and leprosy that had, in this case, been rendered even more harmless by killing it. When Dr O'Brien gave the inoculation, she observed not only fewer symptoms of the cancer, but also an improvement in her patients' emotional health, vitality and general cognitive function.
This result is intriguing for two reasons. First, it offers the possibility of treating clinical depression with what is, in effect, a vaccination. Indeed, M. vaccae is considered a bit of a wonder-bug in this context. Besides cancer, and now depression, it is being looked at as a way of treating Crohn's disease (an inflammation of the gut) and rheumatoid arthritis.

Second, it opens a new line of inquiry into why depression is becoming more common. Two other conditions that have increased in frequency recently are asthma and allergies, both of which are caused by the immune system attacking cells of the body it is supposed to protect.

One explanation for the rise of these two conditions is the hygiene hypothesis. This suggests a lack of childhood exposure to harmless bugs is leading to improperly primed immune systems, which then go on to look for trouble where none exists.

In the case of depression, a similar explanation may pertain. If an ultra-hygienic environment is not stimulating the interaction between immune system and brain, some people may react badly to the consequent lack of serotonin. No one suggests this is the whole explanation for depression, but it may turn out to be part of it." 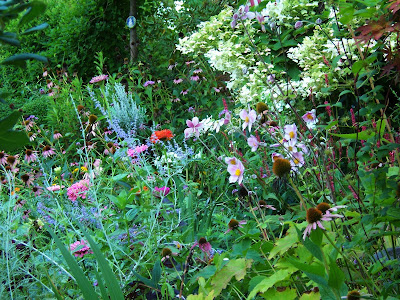 And  a shout out the Plant Delights (one of the best mail order nurseries around,) newsletter, which alerted me to this.

“In some fascinating gardening research, new studies from Sage College of New York confirm a 2007 study from Bristol University and University College London that dirt is indeed a great anti-depressant. Many of us have known this for years, but we just didn’t know why...guess that’s why I don’t make the big bucks. As it turns out, a soil-borne bacteria, Mycobacterium vaccae, acts as an anti-depressant by causing brain cells to produce high levels of the happy hormone, serotonin. Serotonin occurs naturally in the body from the gut to the brain, and plays a particularly important role in mood. Low serotonin levels have been linked to anxiety, depression, aggression, OCD, bipolar disorder, fibromyalgia, and irritable bowel syndrome...who knew? Mycobacterium vaccae has already been used medically in cancer patients to increase their quality of life. The next time you hear that line about not being in the mood, grab your significant other, sans gloves, and head for the garden to get dirty."

Is it possible we need to be around earth to be happy and well? It can be fun to sit around a computer and pound keys, but what if that is only what we want but not what we need?

Have I just veered off subject? Of course not.

I just spent a weekend out on Long Island (if you want you can read about it, there is my other blog, http://lkbwbackyard.blogspot.com/) and once again was struck by how calmly invigorated I felt. Sorta like how gardening makes me feel.

Being by the seaside seems to make many people feel good. Besides the most obvious reasons, have you ever wondered why? This is from WebMD.com


“There's something in the air and while it may not be love, some say it's the next best thing -- negative ions. Negative ions are odorless, tasteless, and invisible molecules that we inhale in abundance in certain environments. Think mountains, waterfalls, and beaches. Once they reach our bloodstream, negative ions are believed to produce biochemical reactions that increase levels of the mood chemical serotonin, helping to alleviate depression, relieve stress, and boost our daytime energy.
Ions are molecules that have gained or lost an electrical charge. . They are created in nature as air molecules break apart due to sunlight, radiation, and moving air and water. You may have experienced the power of negative ions when you last set foot on the beach or walked beneath a waterfall. While part of the euphoria is simply being around these wondrous settings and away from the normal pressures of home and work, the air circulating in the mountains and the beach is said to contain tens of thousands of negative ions -- Much more than the average home or office building, which contain dozens or hundreds, and many register a flat zero.
"The action of the pounding surf creates negative air ions and we also see it immediately after spring thunderstorms when people report lightened moods," says ion researcher Michael Terman, PhD, of Columbia University in New York.
And for a whopping one in three of us who are sensitive to their effects, negative ions can make us feel like we are walking on air. You are one of them if you feel instantly refreshed the moment you open a window and breathe in fresh, humid air.
"You may be one of them if you feel sleepy when you are around an air-conditioner, but feel immediately refreshed and invigorated when you step outside or roll down the car window," Howard tells WebMD. "Air conditioning depletes the atmosphere of negative ions, but an ion generator re-releases the ions that air conditioners remove." 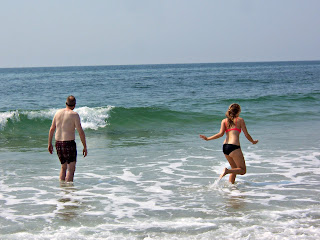 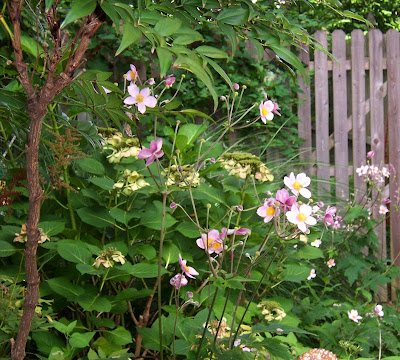 Even if you are skeptical of global warming (I am not,) there is no doubt that if we go on using our power over the earth to loot and disrupt her ecosystems, we may well be destroying one of our own best shots at joy. Once upon a time most humans lived as farmers, hunters and fishermen. They breathed in chemicals that allowed them to cope with their often brutal, dismal and uncivilized worlds. Now, many of us have civilization,-- but we are out of touch with what can make us happy.

I do not think that alienating ourselves from the natural world is what God had in mind when S/He (or, if you are not a Deist, however you think, de facto, we got  dominance,) gave us stewardship of this planet. 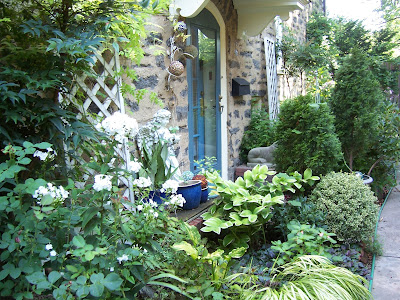 Aren't we supposed to make of this place a garden?

Posted by Kay Wisniewski at 8:40 AM