Roses: The Which and the How, No Need to Explain the Why. 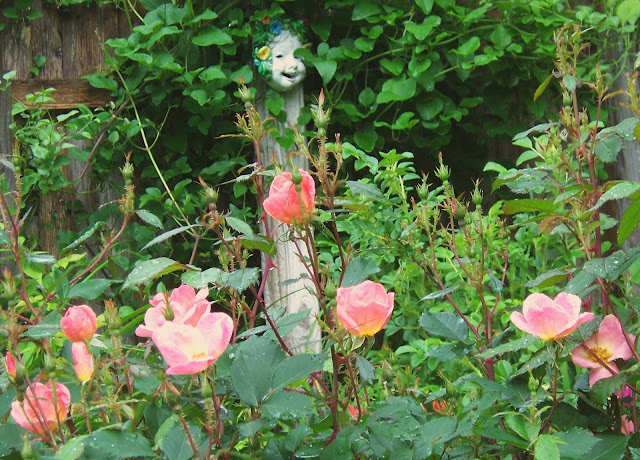 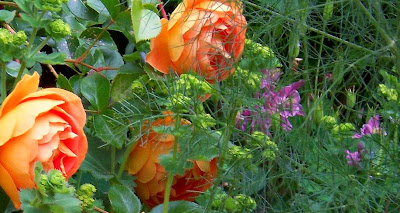 I grew up scared of roses.

Out on Long Island in the 60's, roses were either beautifully wild at dunes' edge or hybrid tea roses that needed to be fussed over, if not fussed over they decayed. Plus, the white ones my parents grew were old sock white by the second day of their 5 day, once a year, bloom.

I had no idea how easy it would be to grow these reblooming beauties ( including the rose at the top of the post. (And yeah--both readings work.)) 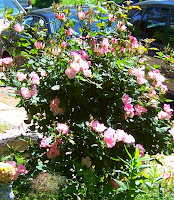 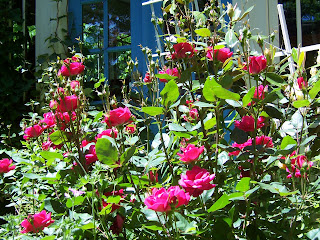 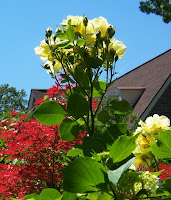 These are not my best roses.  These are the dead-easy roses that gave me confidence to try other roses. These are all Knock-Out Roses in blush pink, yellow, coral and red. They are as likely to be sold at box stores as at nurseries. They have been joined by a new series with "carpet" in the title, and I have high hopes for pretty 'Amber" below. All these need is 5 hours of sun a day, average water, a wack back in March, followed by another after first bloom. If you throw in mulch, compost and/or Rose-Tone, you will be amply rewarded 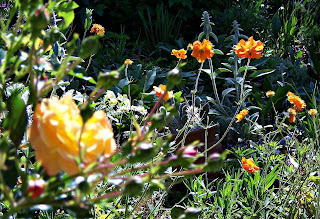 A slightly more difficult but lovey climbing rose came with the house, though she was growing in a part of the back yard that no longer gets much sun. I transplanted her to the side of the house and still do not know her name. She gets black spot every year as summer turns humid, but my lack of fussing and spraying has not lessened her ardor. She remains a doer. 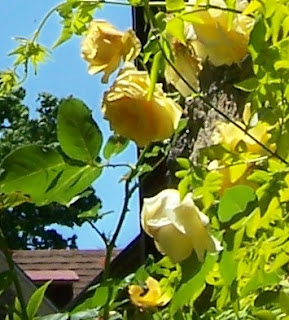 So, after these,  was I ready to advance into higher rosedom?  Well, ready or not, I did. And Anglophile that I am, it was, of course, right into David Austin Roses. 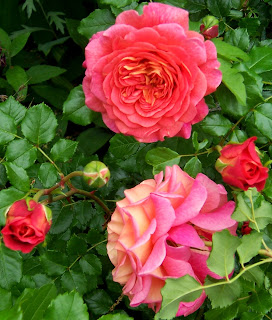 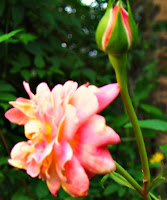 One day, end-of-season, I saw a droopy, neglected rose on sale called Christopher Marlowe. Taking him home, I gave him as much amended Golden Rule love as I could, for which he thanked me eloquently with blooms like this--red at bursting, then pink with golden tangerine tinges, sorta Elizabethean psychadelic.

And--after I saw that I hadn't managed to kill Kit ( he can suffer from non-lethal blackspot thou,) I added Grace, and at full price too. She is achingly comely. 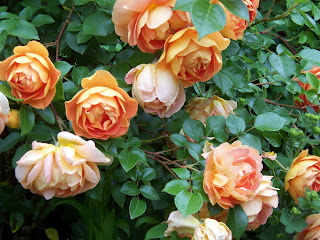 She goes well with Kit, who, lets face it, always needed some kind of Grace. I'd like to add Will soon. 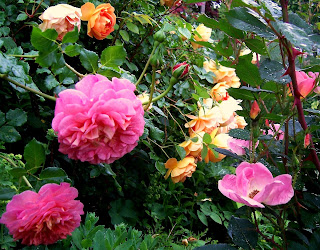 And those roses I mentioned earlier, the ones at dunes' edge that I'd loved as a kid? They were/are species Rugosa Roses, which are hardy and easy. They will grow almost anywhere--including this cultivar in my yard. 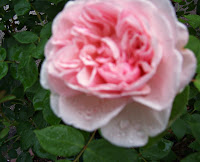 So--that's almost all my roses for now.

Well-till at the Ned Wolf Plant sale I saw Theresa Buget, a Canadian rose without real thorns but with almost ferny foliage and spun sugar blooms (see left.) I'm trying her in the sunniest part of my backyard, since I'm running out of space in the sunny front yard. Which only means I need a bigger sunny front yard! 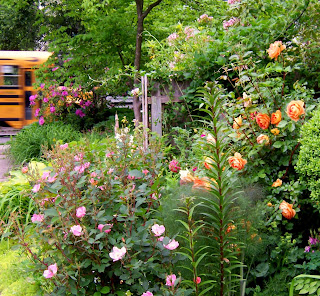 I hope I have quieted any rose fears. Roses are really no more difficult than most plants, slightly heavier feeders maybe, but that is easy to provide. And one last basic but important rule: when you are pruning, always cut just above the node of a stem that has five leaves on it: never 3, always 5. Do that and all will be, not only hunky-dory, but also more sweet-smelling than you could have imagined. 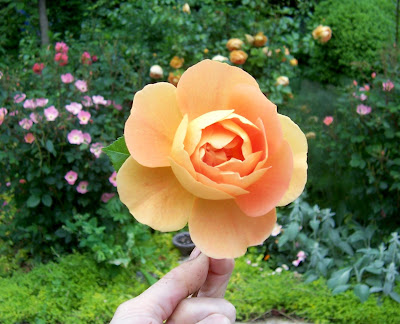 Posted by Kay Wisniewski at 6:27 AM

Kay, surely someone should comment on these lovely images and words. I feel peaceful just being in this internet space with you. My father was big on getting his hands in the earth and growing trees and flowers. He turned a part of our yard into a rose garden (although quite an organized one, typical of a left-dominant brain)and got much joy out of the creating, nurture, and viewing of these plants (as did we). Thanks for sharing! Jane