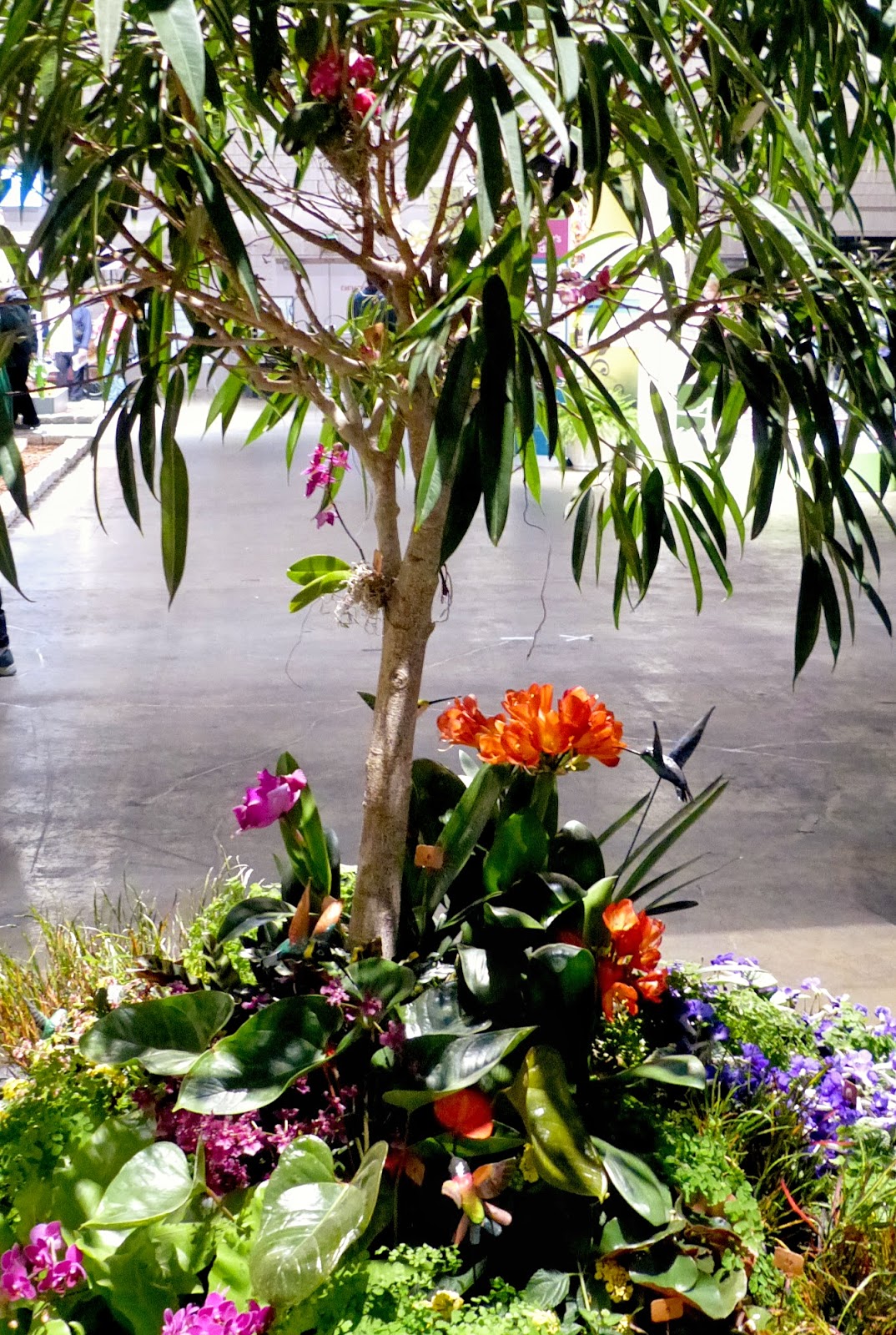 The Flower Show in early March is always welcome and usually wonderful. This year the theme was more complex than usual and I was impressed by how well some exhibitors fulfilled their task of creating a garden that took off from a piece of art. Some interpretations were literal, such as those that consisted of shoving distracting motifs into uncomprehending vegetation. My favorites were the few that seemed to catch the essence of their art by subtly translating motifs into the  body and arrangement of their vegetation, with the end product as much an organic unity as its inspiration.. 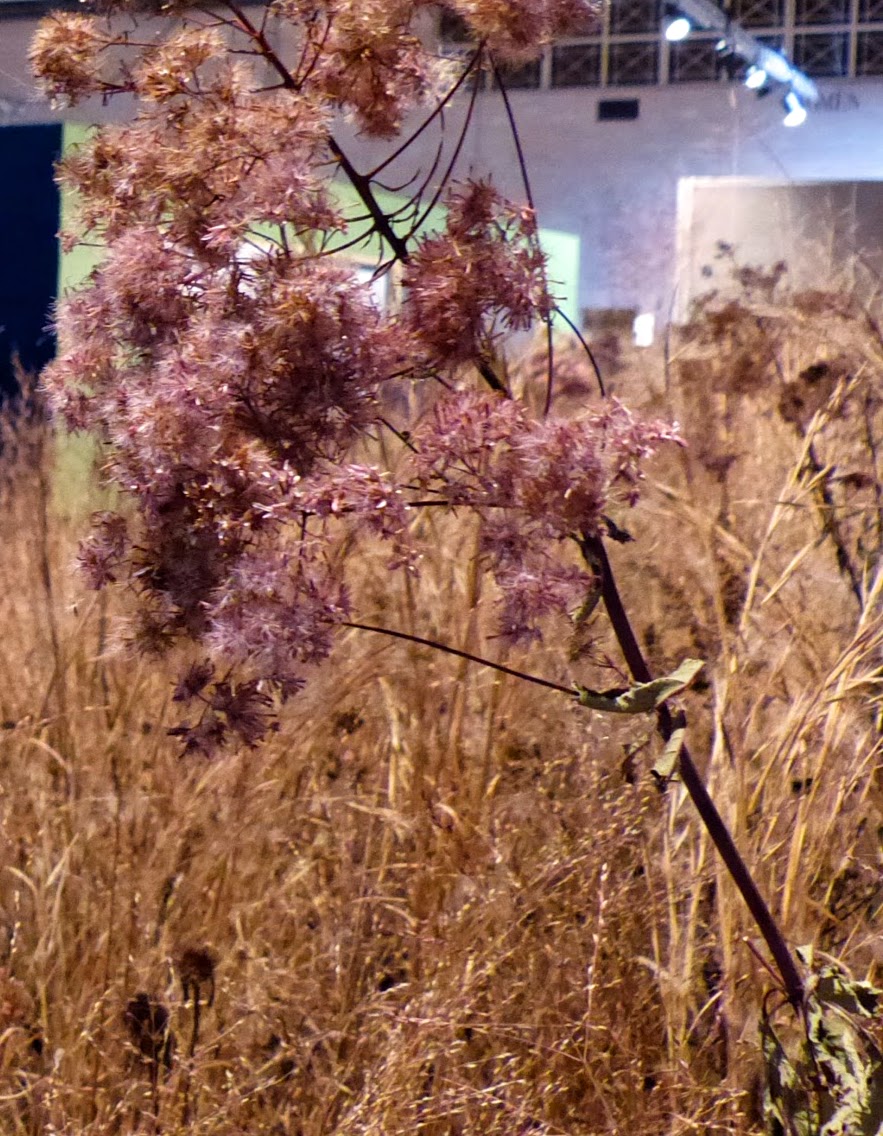 Here you see an unmowed autumn meadow surrounding a pool. The meadow looks indigenous to our area. The style is naturalistic. The formal exhibit gets you to look at the dry grasses and  Joe Pye weed and see their splendor, something you might miss when passing by an overgrown field. The shiny silver blue pool within the meadow sympathetically brings out the vegetation's gold. 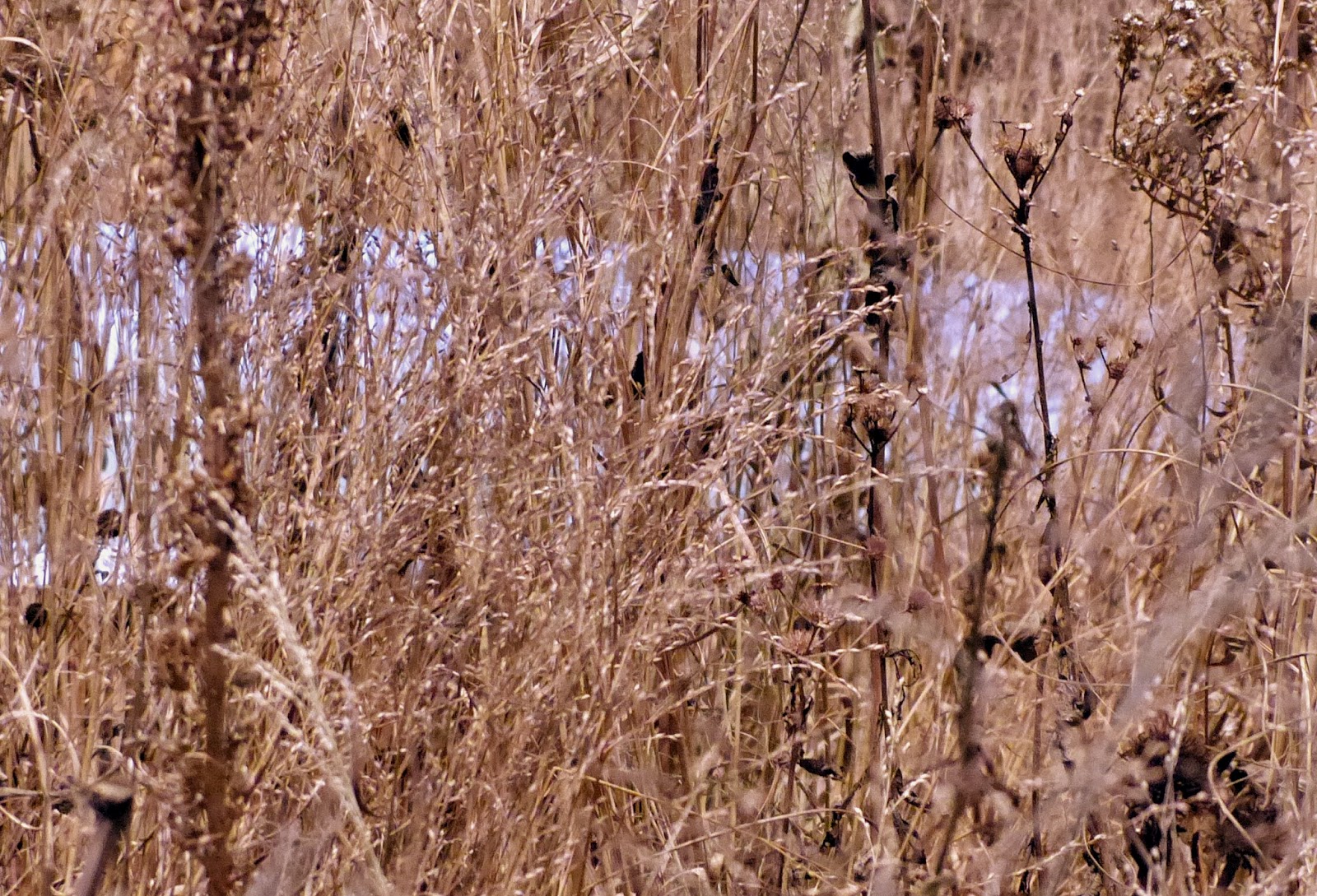 So, here is an exhibit put in by a gardener who values, and asks us to value, the beauty and bounty of nature in decay. One who, it seems, can turn straw into gold and vice versa. For here is the painting the exhibit is based on. 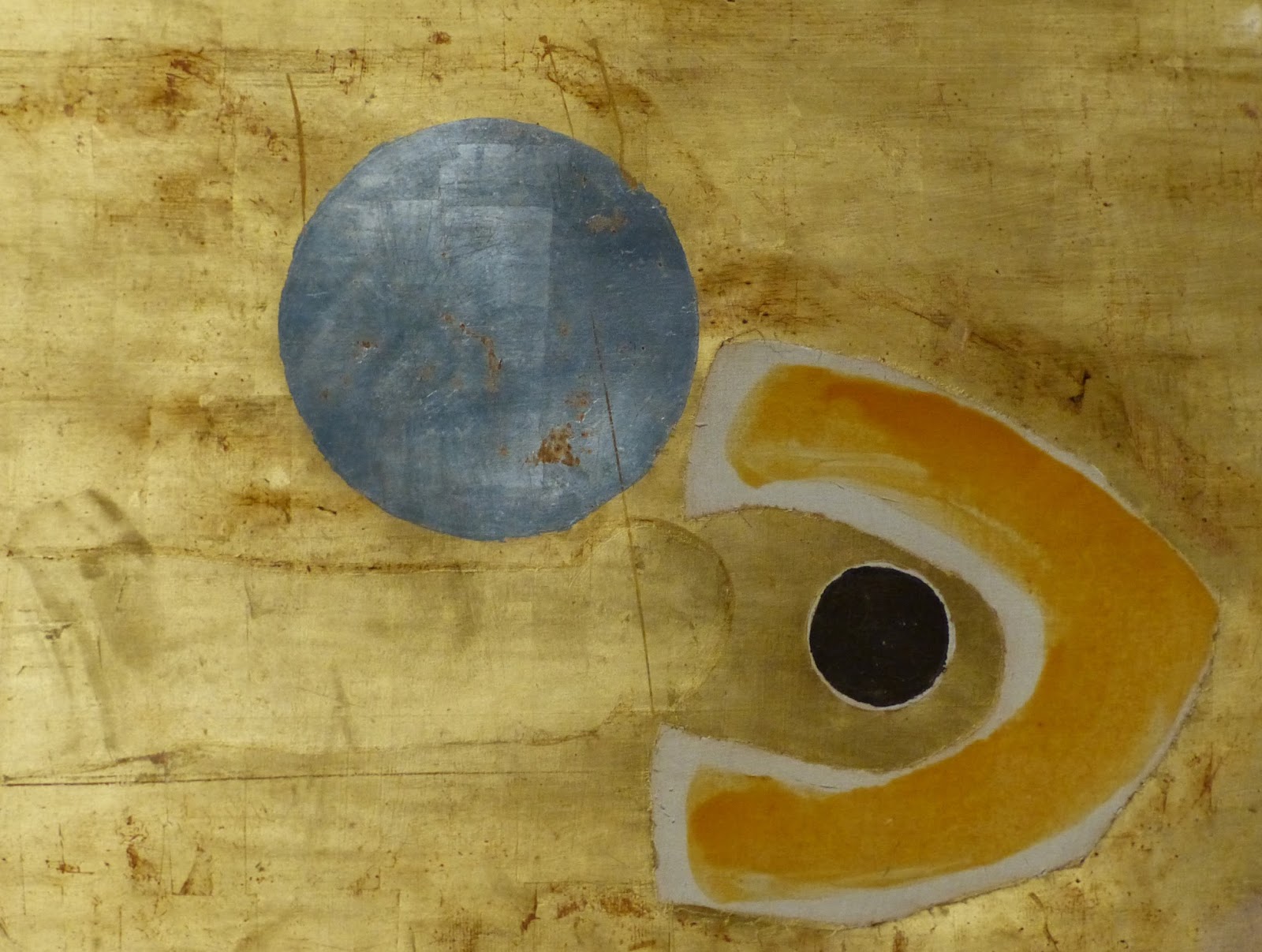 I was really pleased by how well this one worked since for me, both planting and painting were enriched by their relationship. 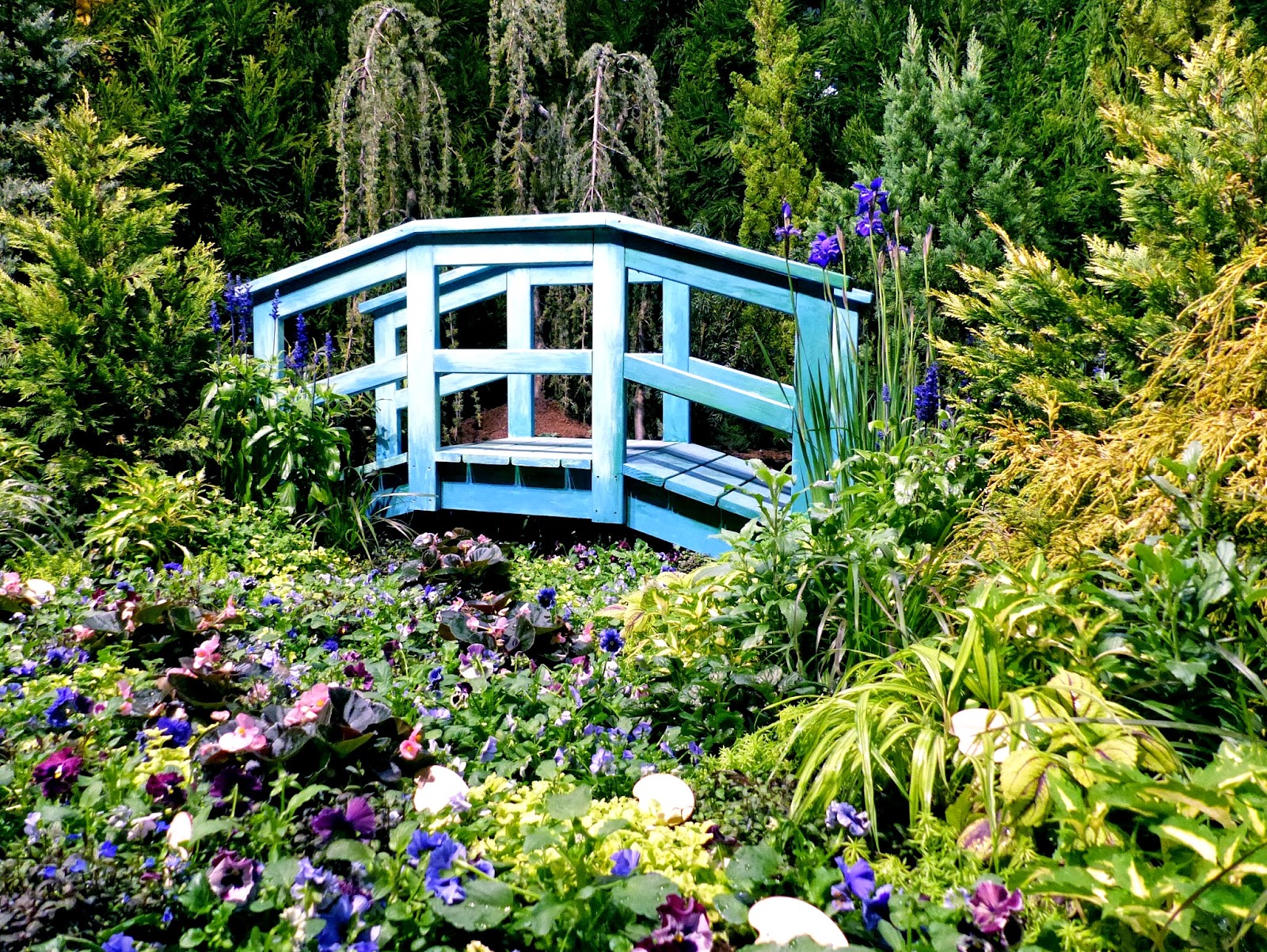 Yup--the iconic image of Monet's garden bridge, seen so many times you hardly can see it all anymore. Now look again, cause this is not just a replication of the scene in three dimensions, it is something much better. It is a transfiguration. Instead of a high-upkeep water garden with water lilies that one would expect under the bridge, there is a locally-practical, easily-maintained pattern of shy violets, thoughtful pansies, dark-leaved begonias, golden moneypenny and short-tressed carex. It is so well-done that even after that first moment's delighted surprise, you don't even want water lilies.

This is what I love the Flower Show for. For giving me new insights into ways to present a garden so that the beauties of the plants are best able to express themselves. To not get in the way of the plants, of nature, to make sure that the sum does not degrade the parts but adds to them a glow previously unsuspected-- this is what the best exhibits offer.

Another exhibit I liked had the look of a simple Maine or Nantucket Cottage. I did not see the art is was based on but I would guess might be by Winslow Homer? 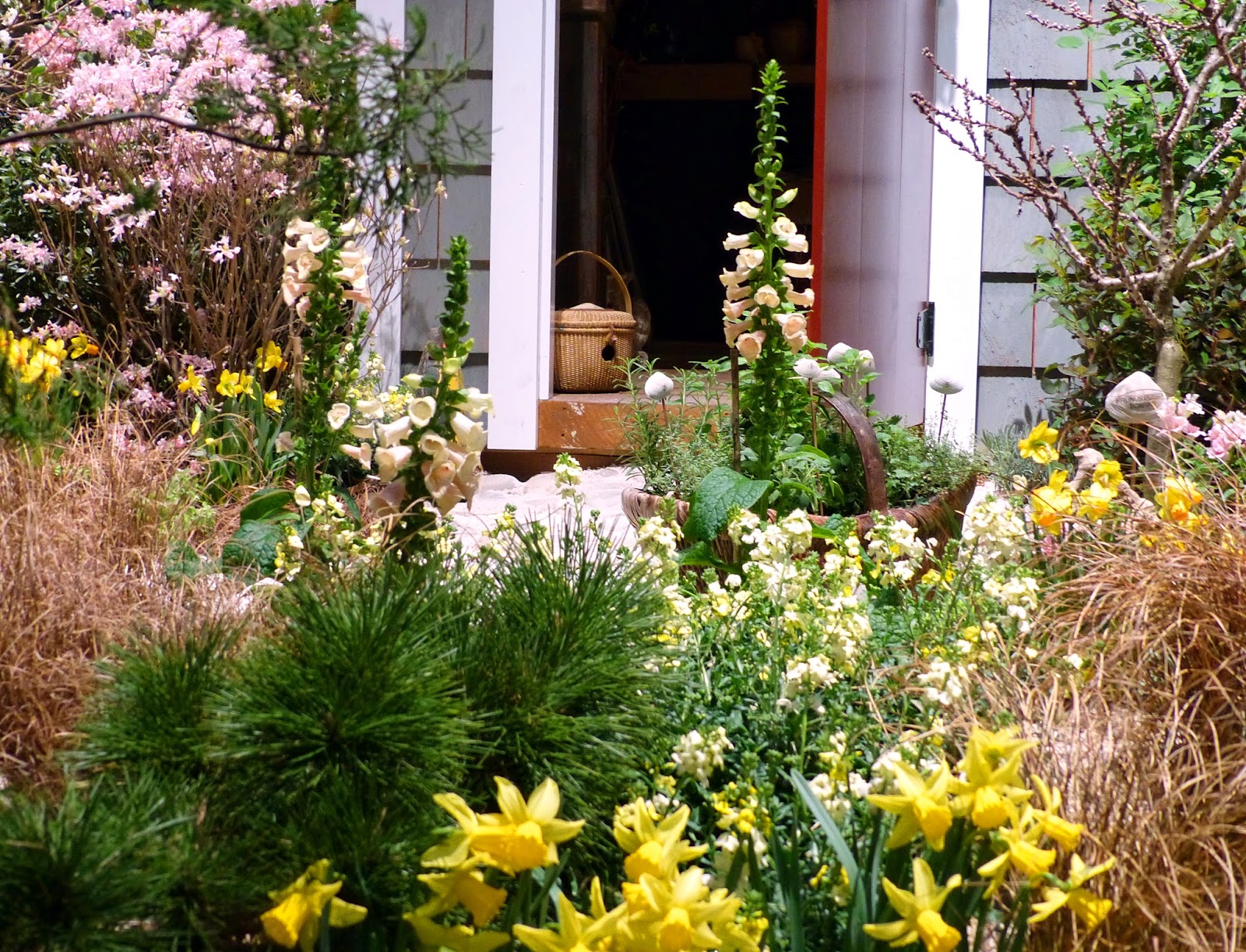 I admit to having heavy demands on the Flower Show. I want to be inspired, enlightened and educated. I want to see practical visions that open new possibilities. What I do not go for is to be entertained. But that is all that many of the exhibits supplied. For instance, at the entrance I walked into the main exhibit. It did not immediately woo me, but knowing it was created by people who are better gardeners than me, I wanted to look around.

Then the lights went out.
Did a fuse blow?


Nope. The dark was intentional. Slowly a pink glow alighted on a few straggly branches of what seemed to be pom-poms. The pink strengthened and started to flow. Slowly. A few more pom-poms appeared. Let me tell you, this was no Fillmore East kinetic display. Nope, this was a good taste, slow-mo, arty light show.  I bolted.

Seeking refuge in smaller displays I found what I needed . Breathed in the scented oxygen, breathed out my fear that this place could turn into Disneyland. I understand that the Show caters to a diverse crowd. Just hope they never forget the dedicated, naturalistic gardener.

So I went on to enjoy the Horticultural Court 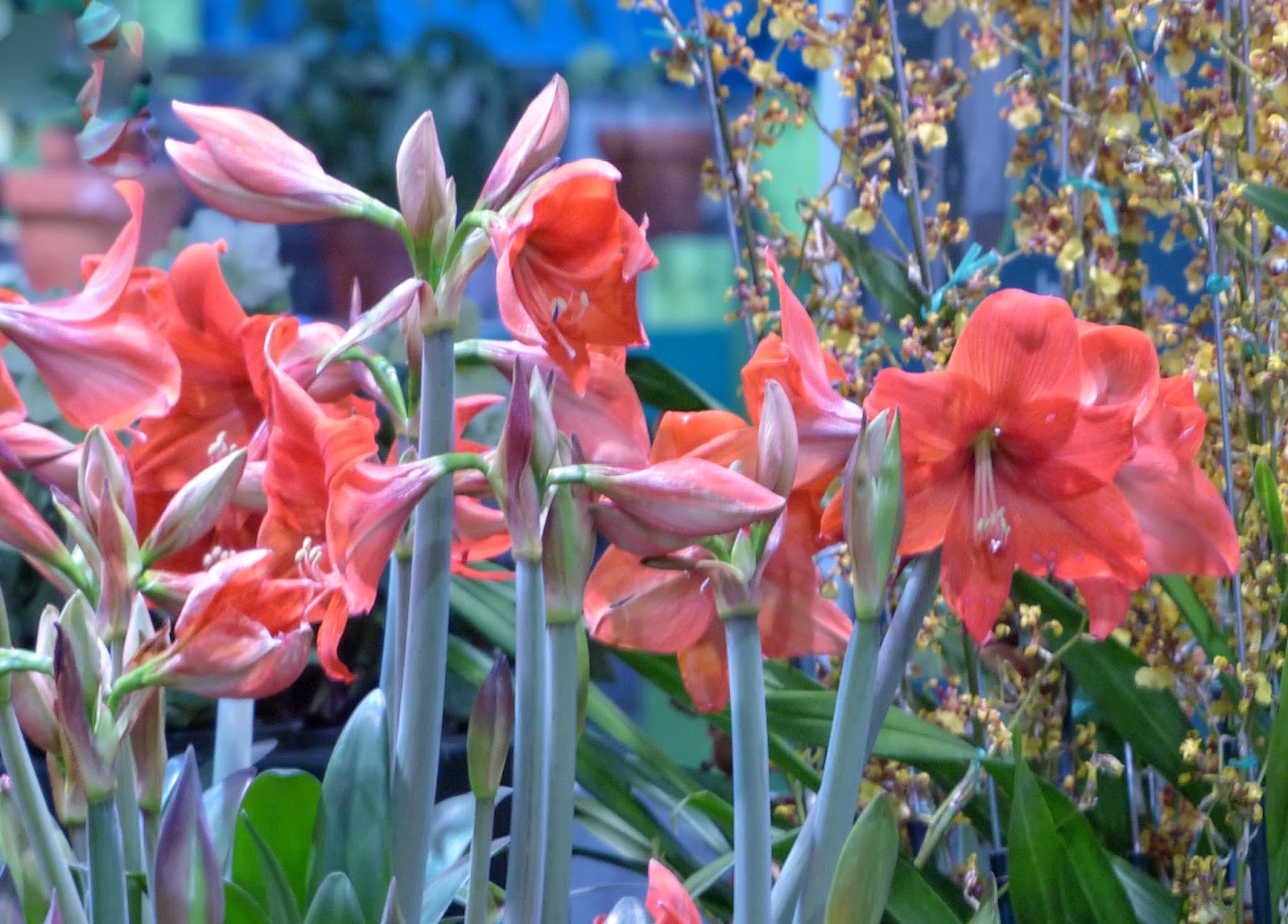 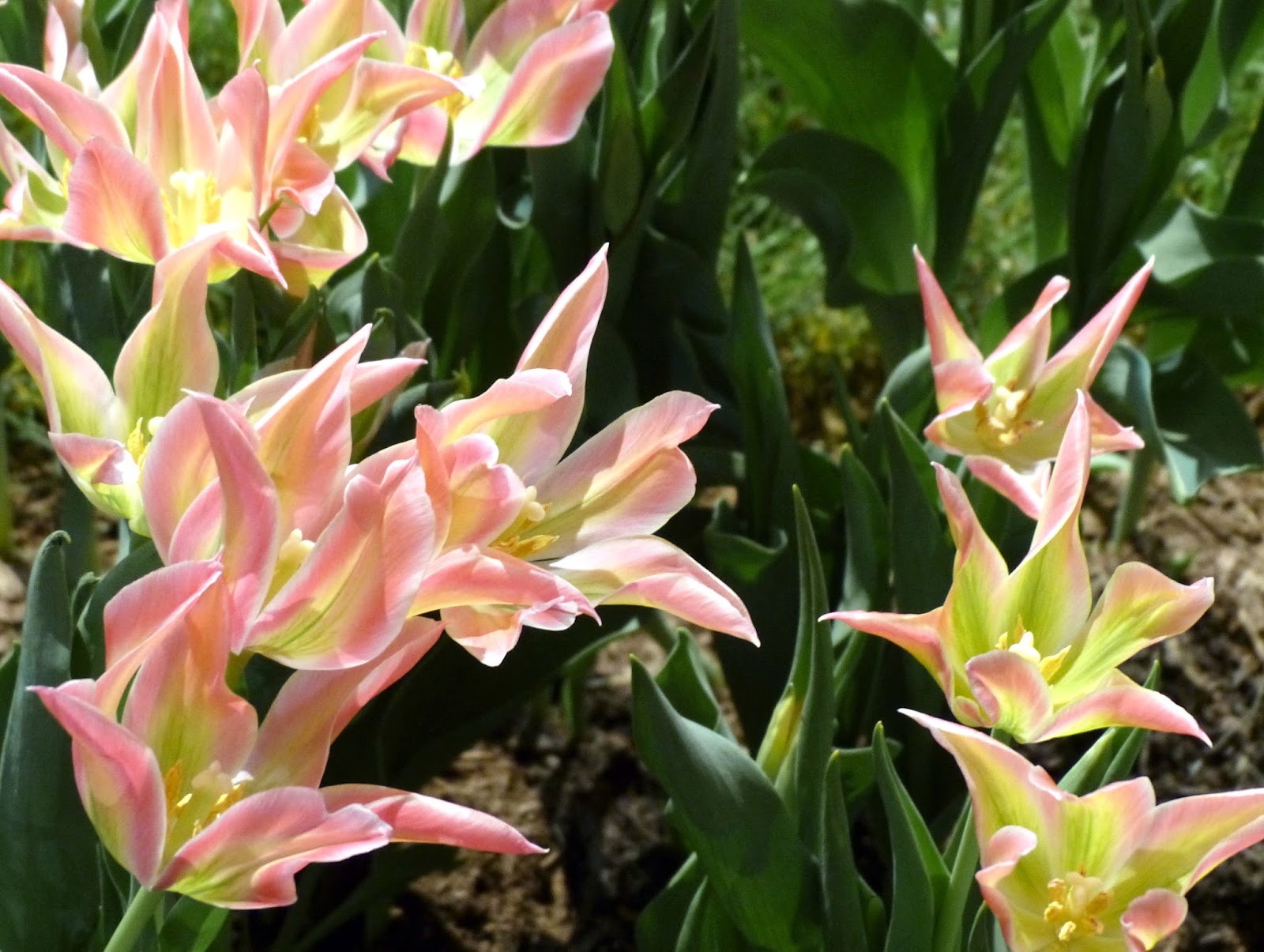 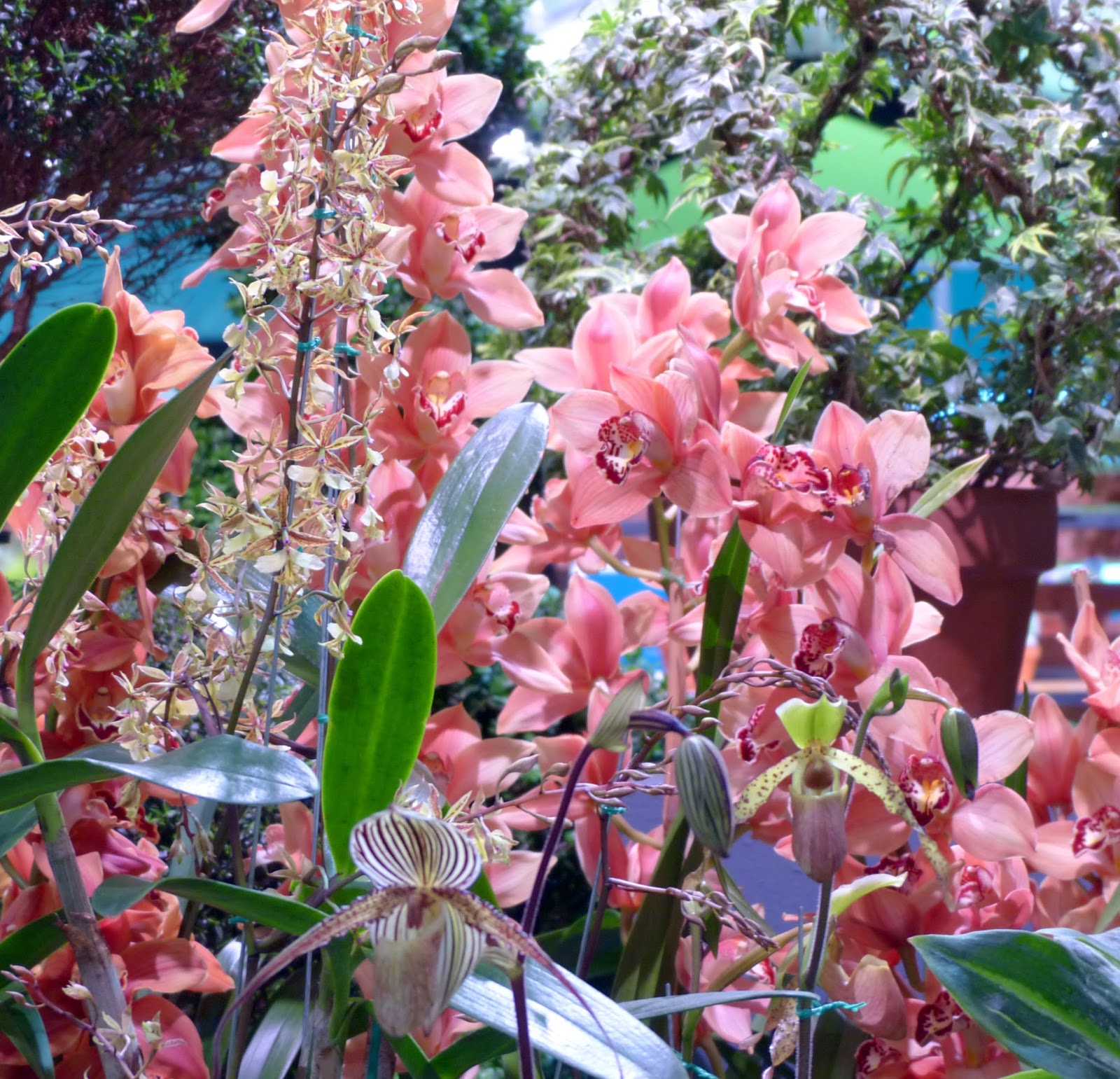 And left with a smile on my face. 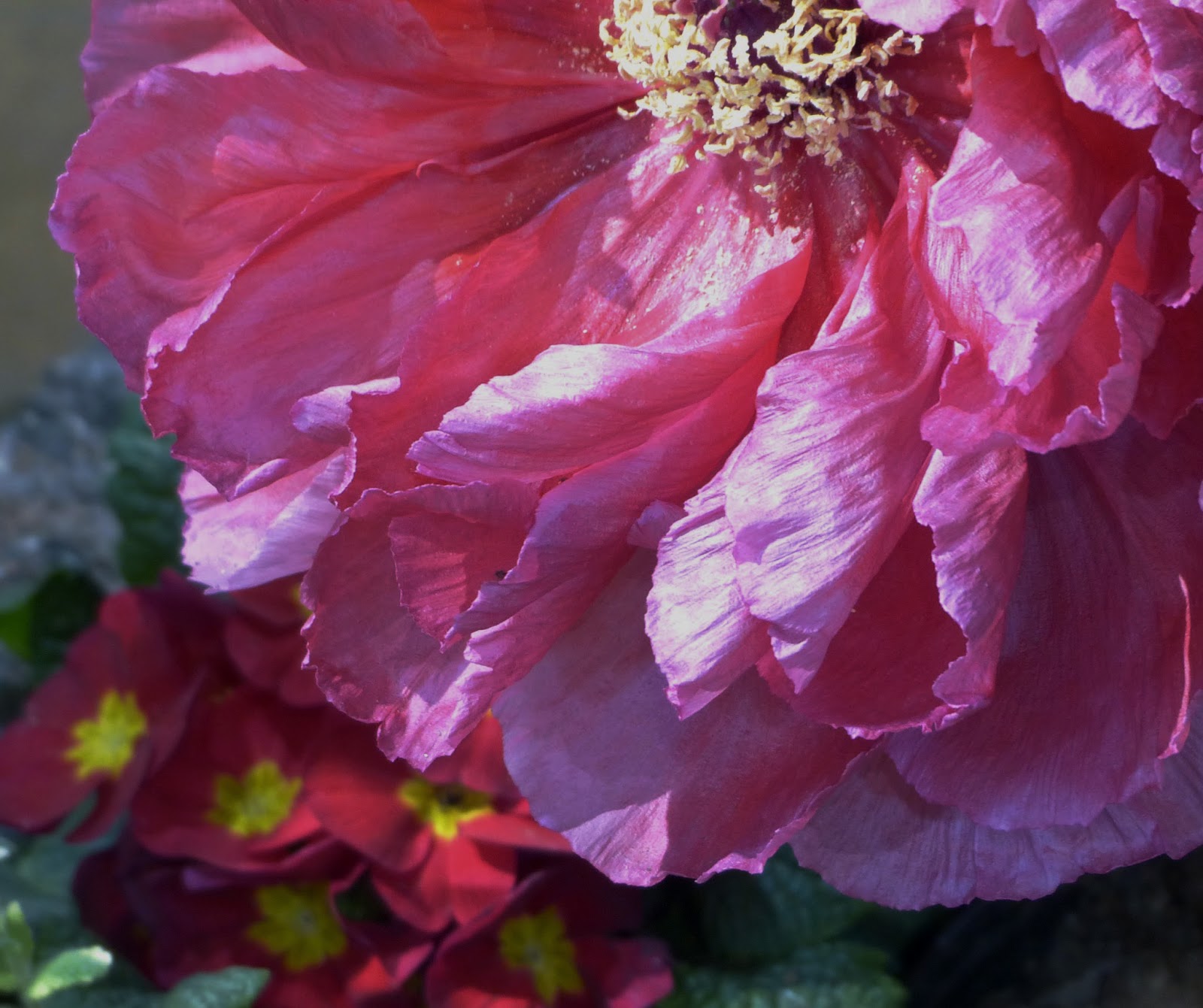 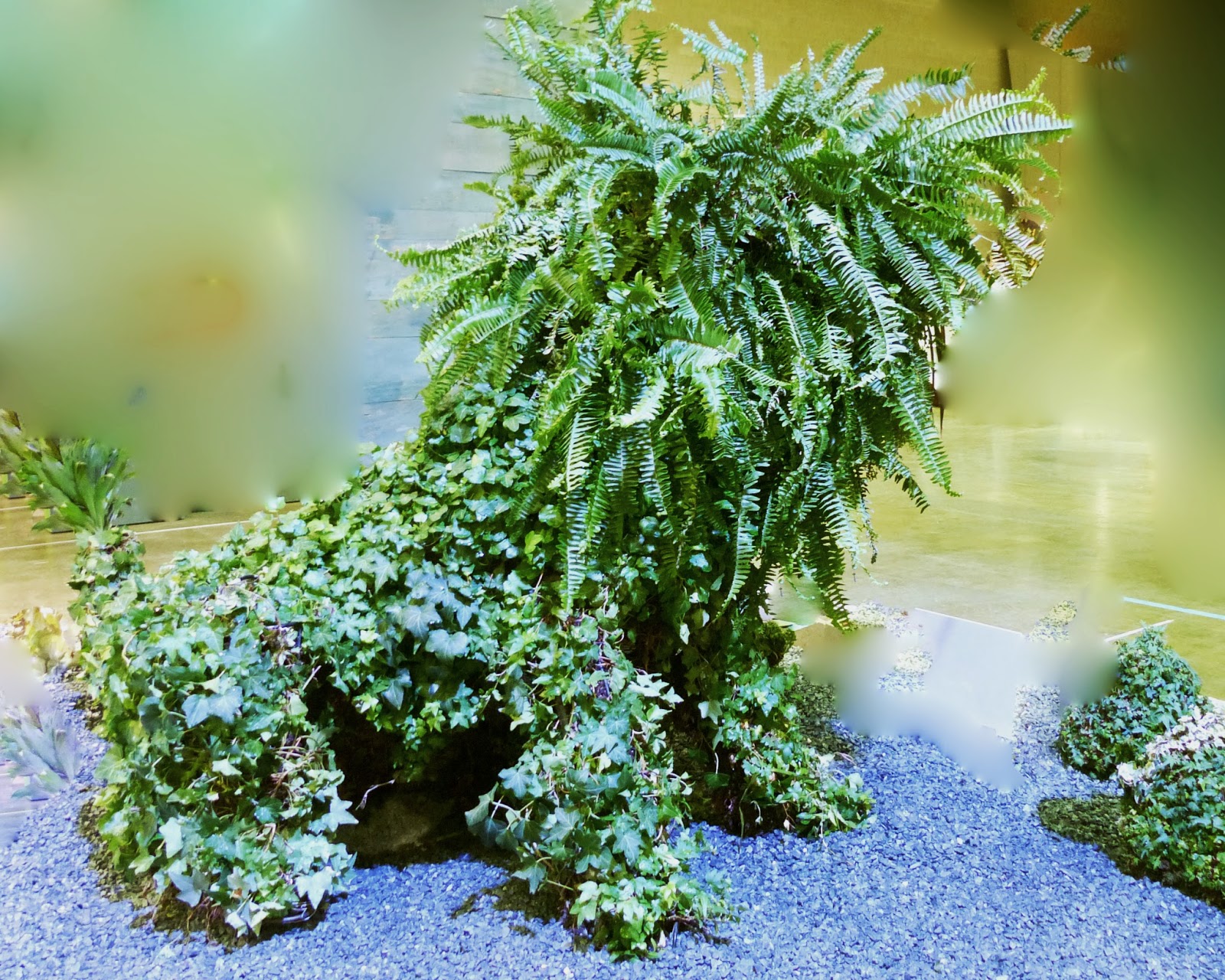 I know many people enjoyed aspects of the Show that I found trying. Well, this blog has always been honest about being from one person's very subjective point of view. That's the fun of it, and sometimes, I hope, the beauty.