The Seasons of Autumn 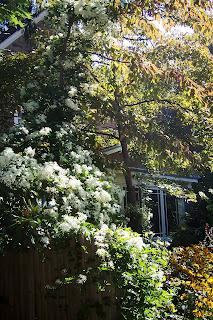 Post 9
First the orchestra tunes up. It is late Summer, when sweet Autumn clematis blooms up into an already fading dogwood. 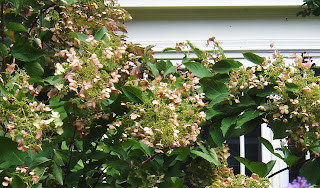 Then the introduction sounds.  Early Autumn mutes the garden into dusty shades almost as beautiful as a second spring. Faded hydrangeas, not just the Mopheads but also the Pee-Gee, with its extravagant chatreuse and russet plumes, flop over, as fluttery layers of hardy begonia cascade down. 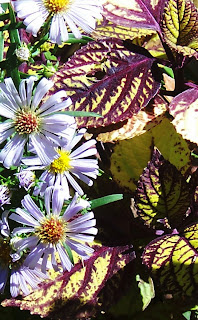 Woodland aster merges slate blue petals with coleus. And receding from the eye, shaggy periwinkle blooms of wild ageratum tease your gaze back into shadow. It's all a quieter beauty than spring's blaze, hushed, tranquil as dusk. 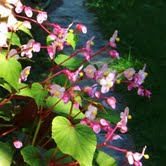 But slowly this twilight stirs and exhales, resounding through the air.  Then it is truly Autumn. 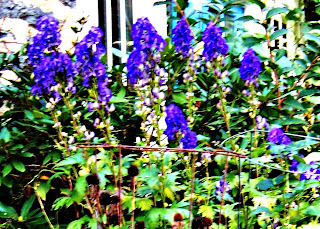 Pink chrysanthemums, cobalt purple aconite and white Montauk daisies will burst out in clear colors. The red maples, now a moody greeny orange will one morning flame red, the kind of backlit red that only nature can produce. Then  leaves will start to fall before most everything else edges into brown: red browns, mauve browns, maroon browns, bronze and golden browns.

The last to go will be the groundcovers-- bugleweed, epimedium and corydalis, which each year seem intent to prove they are really evergreens, while the evergreens stand smugly off, laurel and rhodo.

And all the while the roses will hold out, well into November, maybe even a bloom or two in early December, as if to connect, --if just by one bloom or hip--, to the February Camilla, as the year starts up again.

Midsummer and midwinter are long, closed seasons, but fall and spring are many seasons, open and mutable, which is why we always think they are too short. As they are

Posted by Kay Wisniewski at 5:07 PM

Hi! This is Signe. Here is my website you asked about www.signerosedesigns.com

You can contact me through that site or through here. I have two questions. 1: can you send me the Rhodo contact? 2: how do you know how close to plant things without overcrowding them but to get that really full look?

Signe--I will send you the contact on your page.

And you know--your question gives me a great idea for a post. But till then --the short answer is --plant -almost- as close together as you want to begin with, forget what the tag says. But, then, in fall and spring, you have to be willing to divide and move stuff as needed. right now I'm doing a bunch of that in my back.

Do you have yellow corydalis? If not, I could give you some.

Thanks again for being kind about my busyness

This is beautifully written. It's great you're doing this blog.