Post 6
Clio is the muse of history, but what does that mean? What inspires history, moving us to remember and commemorate the past, especially the good of the past?

Every gardener was once a child and as a child wondered through a garden or gardens, leaving vivid snapshot memories. Old fashioned flowers may call up scenes of a patio bordered by swaying lilies, or a porch swing near an unknown flower.

One difference between many present plants and ones we think of as old-fashioned is that the old fashioned plants reproduce.  Because modern taste has gravitated towards more and larger blooms that last longer, this has led to hybridization that keeps plants from setting seed, or setting seeds that reproduce unpredictibly.

Select Seeds, one of the companies that specialize in old-fashioned seeds and plants,(Perennial Pleasures is another, Seed Savers' Exchange another,) gives these older plants this definition: "Antique, or heirloom flowers are open-pollinated varieties that originated fifty or more years ago. Open-pollinated flowers are fertilized by insects, hummingbirds or wind, and the resulting seeds will produce plants that are identical or very similar to the parent plant." 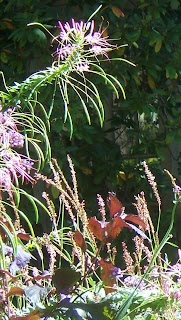 Cleome,  which makes me think of a voluptuous sylph in a silk dressing gown, manages to look blowsy and delicate at the same time. Originally from the West Indies, it is a repeating annual in our area -- by repeating, I mean that it reproduces every year from seeds it sheds the year before. Because it so easily reproduces from seed, once you have some you will soon have more. If it spreads too much, it is easy to pull out and transplant. Or give to a friend, which is how I acquired my first stand.
It starts blooming in July and often keeps up till frost.  This is because its flower turns into seed pods as the plant rises, making a sort of spiraling ladder.  The seed pods, which are like steps,  are easy to gather and spread where you would like. It is as if Cleome were writing its history in unwinding seed posd.
“All things are engaged in writing their history.” Ralph Waldo Emerson 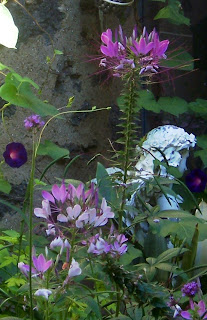 So, my tentative answer to the opening question -- what is history's muse?-- is this. Though history, anyone's history, includes repungnant, not to mention sad and difficult incidents as well as happy ones, all  these incidents have been experienced by the self. And what has formed this self? On the most mundane level, it is love. For a child who is given no love or care at all dies. The baby's earliest sense of self comes from interaction with love.

Perhaps, because love sets the structure of self, that structure brings a kind of love to what the self experiences. And so the past, and its path, acquires worth.
Cleome, tall, fertile and full-blown, self-seeds itself around the garden like memory, framing new vistas amidst old-fashioned plumes. It is a good flower to plant in a place that you love, there to perhaps bring history's best gifts,  good report and peace.

How-to: Cleome hasslerana is an easy self-seeder. In fall throw seed pods or seeds where you want it, then thin in late spring. I've seen it colored white, pink and white, bubblegum pink, lavender, lavender and white and purple. If it starts to fall over or gets too gangly, lop it off and two flowers will grow back lower. It like sun and lots of water or semi-shade and less water -- it looks piqued if allowed to dry out.
Posted by Kay Wisniewski at 12:04 PM

Kate: We live so close, but were not aware, until now,about your many wonderful thoughts and ideas!! And that beautiful display of plants, flowers, shrubs...whatever!!!Wow!!Your blog is super!! Sally and Alex
P.S. We like sharing some of your plants especially those that blow over to us. Sally

That is so lovely of you... and for what does not blow over, you know to just ask. Thank you for your kind comment