A Phlox of Confessions 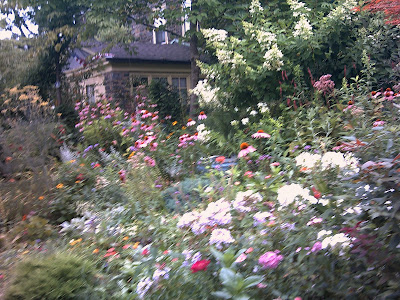 Now is the time for tall garden phlox,(Phlox paniculata.)  Just as summer  turns up the heat and regular life droops, up springs these wide clouds of white, pink and lavender, to drift through the garden and lull us into the dog days. 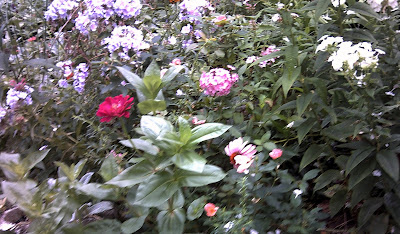 Full summer, like long winter, slows down time. Confession -- slows down to such an extent that I can't seem to wax lyrical in my wonted way. See-- its not quite turning out right, is it? Even though phlox is a plant I really like and which grows great around here.

Confession--this might be partially because my camera woes continue. Thou my lost camera was returned, all the packing and unpacking resulted in a broken battery recharger. And since my camera is not spanking new, both proper battery and recharger are hard to find and cost enough to make me think twice. Twice, and then forward dreamily to a spanking new camera for Christmas. So for now I'm using a cheaper drugstore camera that does not have as good picture quality. --But, ... I draw inspiration from pics that are able to suggest the garden's reality. Bright, clear pics like this one. 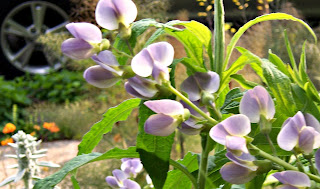 Better pic than the two recent ones at the top of this post, right?

And Confession-- I just realized another reason why I might be blocked--camera,.shamera -- I'm evading an issue.

I Do Not Really Garden Between the 4th of July and Labor Day.

My garden has its own seasons. Bare Bones, Emergence, Flourishing, Rampant, Rank, Late Beauty, Scenic Decay, and Wow, Is That Still Blooming?

We are now at Rampant heading into Rank. And it's a jungle out there, a beautiful, hot, teeming, beneficent jungle. O.K., on maybe one or two almost cool mornings I will grab a machete and hack out some of the seething undergrowth. But on a whole I figure that the garden is best experienced from somewhere comfortable, somewhere with air-conditioning and cool drinks. Like inside.

Hate Philly summers and hate being out in them. So here is my garden blog, based on my love of gardening, that admits to not gardening all summer. And penultimate Confession--I doubt I am the only one of whom this is true. (Final Confession--I am not sure I used 'whom' correctly in the last sentence, but 'who' sounds wrong. The "only one" is linked to "I" and therefore the subject, but the "I doubt" undoes the link? Or what?)

How to Phlox--  First tip, not with white string. The secret of beautiful Phlox is to find cultivars that are mildew resistant.

"David,"which is white, and Katherine, which is lavender, work well for me. I also have a tall hot pink one that is nameless. Long ago and far away, in Stowe Vermont, there was an alright but not great restaurant called Whiskers, now defunct. Set in the valley before Mt. Mansfield, it had a large outdoor deck that bordered on a wonderful, rampaging, wild garden(which, sadly, is now abandoned, neglected and slowly going to weed.) I was allowed a small bit of phlox, which I brought back to Philly, not sure it could take our humid furnace of a summer. Well, it can and it does, bountifully. The woman who created the garden said it was a native, and that is all I know.

So, if you have a mildew-resistant strain, plant it in full sun or almost full sun in regular garden soil. It likes some water, but aside from that is easygoing. If you are lucky it will spread, but not too quickly.