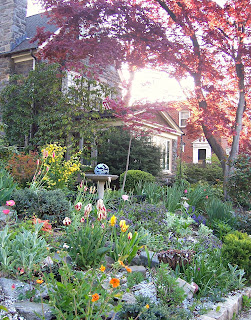 What has sprung up this spring? The  picture on the left was taken recently and shows local spring staples like tulips (the bits of color spotted about) and kerria ( the big yellow blob to the left of the birdbath.). Both are common around here because they are easy, and if done well, attractive. 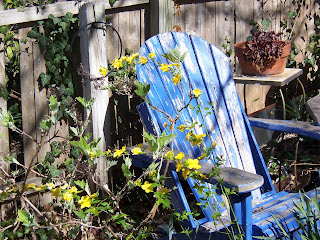 Here is a picture of a small bit of Kerria just beginning. What I like about this plant is that it can take a fair amount of shade, fills in an awkward time of year (the one between blindingly brassy forsythias and either horribly or gloriously brassy azaleas,) and when done right, is not brassy at all. It is a mellower yellow than forsythia, and naturally grows in a squiggly way. If you let it squig and do not plant it in too solid blocks (or buy the double flowered version, which too my eyes is way too dense,) and cut it back hard right after blooming, you will be rewarded with a woodland plant that spreads just enough to let you easily divide it and use the suckers elsewhere. It will even do some reblooming later in the summer. 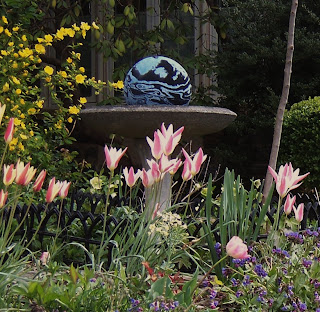 Tulipa clusiana:  Here you see kerria with one of my favorite tulips, Lady Tulip. It has a graceful form where the stalk is not overwhelmed by the flower, which shows that it is a species tulips, an old type of tulip that naturalizes easily.  In good conditions can count on it coming back for, well, a lot longer than non species tulips. Carolus Clusius (1526-1609),humanistic botanist,  is supposed to have first brought it to the Netherlands and hence Europe. Give it sun ,water and good drainage. After bloom deadhead most but leave a few to develop seeds, seeds that may end up in places you never expected. 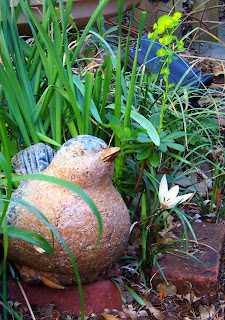 This is a back, utility part of the garden. Yet somehow it has acquired a stray euphorbia and a small Lady tulip. Good surprises are part of what I love about the garden. Sure, you can rip up everything that does not fit with your plans. But why would you want to? Sometimes things turn out better than your plans could have imagined. Next year,  I may try to plant more of this combination of Lady tulip and wood spurge. It works.

Now, while my main investment is in species tulips, I admit to having a hard time passing up the cheap bags of bulbs they sell in the box stores. So if the price is right, I give in, knowing I'm getting tulips good for at best 2 or 3 years. 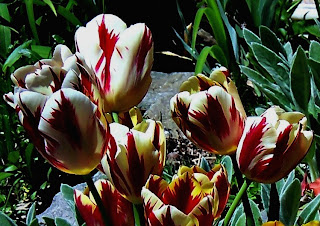 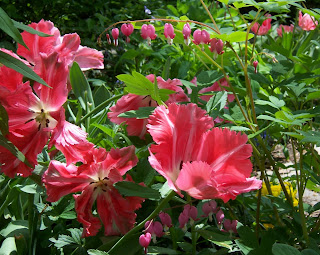 Here is a bunch in bloom right now. They make me think of the stately tulips in old Dutch still lives. The painterly feathers of red on cream were then the result of a potato blight which caused the color to "break," which made the tulips rare, expensive and the cause of a financial crash that briefly ruined the baroque Dutch economy.  Now, of course, these tulips are not the effects of a blight, but bred to look this way. Still, they are a lovely reminder of how silly humans, and even  whole societies, can be.

From a few years back, these tulips on the left are another of my favorite tulips, but I can not remember what they were called, nor have I seen them again. They were a strong, jubilant pink that fanned  out in ruffled, variegated stripes. They looked good from bud to bloom to falling apart, as they are pictured here. I do hope they turn up again.

I had a neighbor who once told me that our 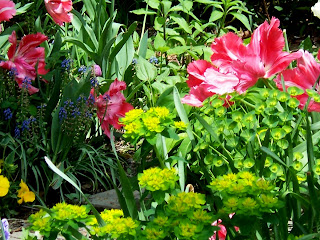 contiguous front yards were poisoned, that the soil had been harmed in some way. What he meant was that when he plunked a plant down into said soil's embrace, the plant would die. But it died because he paid no heed to what the plant needed.

He had dry shade with low pH but he expected plants to grow that needed different, easier conditions.The soil was difficult--all compacted clay riddled with tree roots. But he did not care to improve the structure of the soil with compost or dig out some of the tree roots.  Still, he could not fathom why a plant, a living thing, did not thrive under such stringent conditions.

Anybody can get a plant, but it is care, taking care, that makes a garden. I like kerria because it reminds me of this, just as tulips remind me how silly we humans can be, and how we all need care, all of us, if our lives are to flourish. 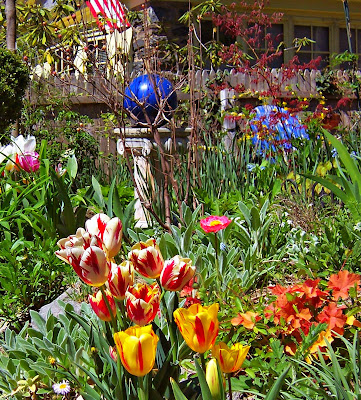 How to Kerria: Kerria does well in all but the deepest shade, is not fussy about soil type and has the main drawback of growing like Topsey. So cut it back hard after blooming and in the spring or fall, dig up and transplant any suckers to where you want more of it. Because you will want more of it.
Posted by Kay Wisniewski at 3:36 PM