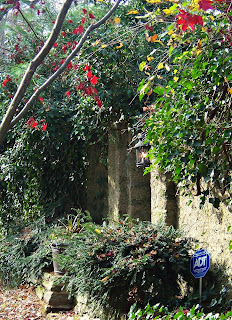 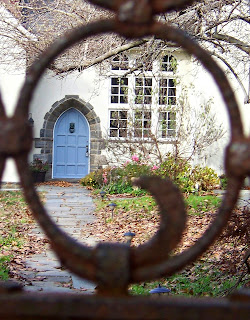 What you see is the entry of one of the houses lived in by the Red Rose Girls, who, of course, were not girls at all but independent women and who, despite their fanciful name, were hard working artists whose images was so ubiquitous that it could be argued that they were three of the most popular artists of their time. Yet you may never have heard of them, even though they lived right here in Mt. Airy. 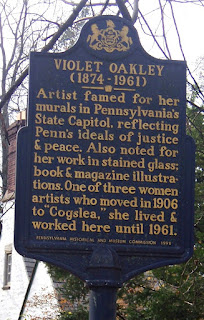 Well, of course not.  They were women, remember. And middle class women who had to earn a living if they did not want to marry. Round the turn of the century, when they really started getting going, being a female, fine artist, and therefore one fit for critical regard, was for the Cecilia Beauxes or Mary Cassatts of the world, rich girls with connections (not that they did not have their own struggles and trials.) No,Jessie Willcox Smith, Violet Oakley and Elizabeth Shippen Green needed to work, work their way through PAFA, work their way through classes at Drexel with Howard Pyle, and work their way through the world, so that they could live as they wished. And they wished to live together.

When they (including their house manager Henrietta Cozens,) first formed their household at the Red Rose Inn on the Main Line, they quite consciously pledged themselves to each other as a family. Smith and Cozens were a pair and Oakley was obviously smitten by the flirt of the group, Green, who appears to have enjoyed both male and female regard (yes, dear reader, the plot will complicate around this point.) 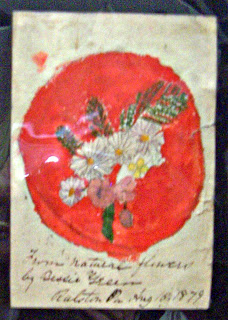 (The above bouquet is by Green at age 11, preserved by her father Joel
and found in the first volume of her scrapbooks, which are owned
by the Free Library of Philadelphia.)
When the Red Rose Girls (RRG) could no longer lease the Red Rose Inn, they looked for a bucolic, romantic old house near Philadelphia. George Woodward (whom they dubbed St. George ( legend has it that this is how a disjointed bit of Allen's Lane became St. George's Lane,)) offered them 5 acres and an old farmhouse that would be redone by architect Frank Miles Day.  This was a generous offer, since the rent Woodward proposed cost less than what they were paying for at the Inn. Hence the genesis of Cogslea with its stables and outbuildings. Why Cogslea?  Well, Cogs for the initials of the 4 women, and lea because it was an olde timey way of saying meadow.

If you are lucky enough to see the property as it is at present, what is most striking about it is not the comfortable-looking old-fashioned house, but the two caryatids in its front yard, 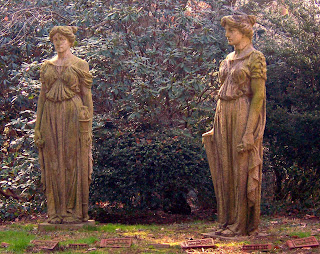 Their topknot hairstyles feel evocative of ...
... As you step towards the gate it is as if two of the RRGs have come out to welcome you. According to my understanding, these evocative caryatids were bought by the current resident at an auction run by the now defunct Fairmount Park Commission. It appears that they come from the Philadelphia Gasworks building that once stood at Arch and Broad. It is unusual to find such a sensitive, enhancing addition to an historical site.The obscurity of the spot, and the statues' silent presence beneath towering trees gives the visitor an  uncanny, time-out-of-time moment. 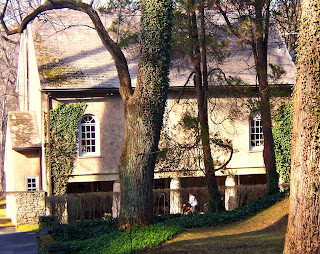 This is lower Cogslea, the stable turned studio where Violet Oakley worked and later lived with her post-Green amorota and assistant, Edith Emerson, who later became a Director and Curator of the Woodmere Art Museum in Chestnut Hill.
The house pictured in the first four pictures of this post is Cogshill, the house Jessie Willcox Smith and Henrietta Cozens moved into after Elizabeth Shippen Green jumped ship to enter into what appears to have been a white marriage with Huger Elliott, and Violet Oakley's volatile temperament found relief in an intense but proselytizing turn to Christian Science.
All these houses take much of their temperament from their placement at the top of a steep valley made by Cresheim Creek as it pours towards the Wissahickon. This powerful, romantic landscape set somehow within a major city was a sympathetic setting for four practical romantics who managed to live as they wished without devolving into the excesses of undisciplined bohemianism. They retained the privileges of social respectability and financial prudence (which were far more crucial for woman than men in those days,) while exercising their talents, their sexual preferences and their vision of a fairer world.
There is no utopia on this earth. But there are moments when things get a bit brighter. And the approx. 10 years during which the RRGs worked and loved, creating a supportive environment that helped them each to be happy, stable and productive, appears to qualify as such.
Posted by Kay Wisniewski at 8:06 AM