Wissahickon Style I, or the Humility of Corydalis lutea, the plant money can't buy 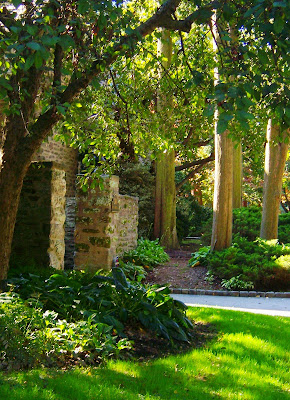 Post 15
Every place has its own feel. And the factors that go into this feel are too complex for rational analysis. No instrument can measure it; only human intuition is complex enough to process it 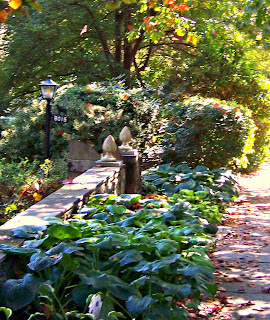 It's what the ancients called the Genius Loci, the intelligence of the place. If you garden in harmony with it, it will do the really hard work for you.

In Chestnut Hill/Mt. Airy/Germantown, with our Arts & Crafts Wissahickon Schist houses; acid, clayey soil; tall trees and the remnants of slate roofs and sidewalk, a distinctive style has spread without any trendy style guru laying down dictates, although a generous founding family has and does exert a benign influence.

Overall  it is a style that has evolved with the community through time. I love that, I love it and I love that folk-styles, of all sorts, can still exist in this product-driven ( fallen?) world. 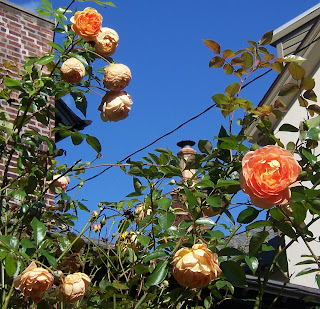 Once this area was grand, where Philly's richest, (and those who strove to be its richest,) built. It was a shiny modern thing--a railroad suburb. Time has worn down the shine. Now it is home base for a combo of comfortable professionals, bohos, civil servants, middle and working class and the remains of a true American gentry, whose trust funds may not be what they once were,-- but whose taste is.

So often things are just a tad shabby. Items in the garden may look inherited, whether or not they are.You can always refer to wear as patina.

The Arts &  Crafts  influence (many of the houses were built 1880-1930,) comes in various substyles: Norman, Cotswold, Colonial, Queen Anne, William and Mary, Dutch, Carpenter Gothic and Italianate. Add to this some earlier houses, some Frank Loyd Wright-like numbers nestled into hillocks and brick rowhouse construction from Victorian times till post-WWII. None of these styles are pretentious. Some, if kept up gleamingly, may whisper wealth; none shout. One of the common factors to Wissahickon style is its mix of beauty with a comfortable lack of pretension.

"Homes built in the Wissahickon style of architecture are inspired by the vernacular architecture of France, England, and Colonial America ... They use native materials, such as Wissahickon schist, in their construction and native plants in their gardens...It’s very attractive, but it also makes sense ecologically,”
Remark by historian David Contosta, from story in the Springfield Sun, Mar 24, 2011 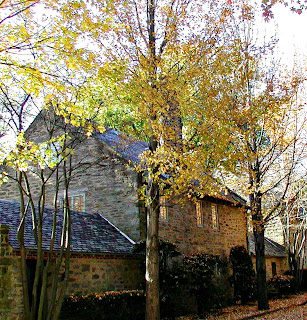 When the houses have grown into the land, or the land has grown up around them,--and especially when its hard to tell which -- you've hit Wissahickon style paydirt. And in some corner or niche, you are likely to see a  humble, local weed/ flower. People who evaluate things by cost call it a weed, I call it an overlooked, undervalued treasure. Since it dislikes being potted up it usually spreads by seed, not sale. If you do not have any of this gem, yellow corydalis, just ask around. Chances are it modestly grows somewhere near you, peeking out of a crevice in a wall or from the underside of a step. 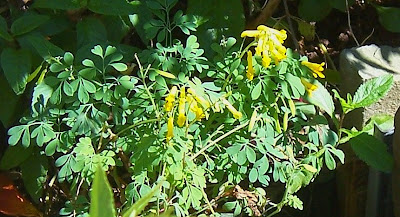 Its bluish, ferny, feathery foliage comes up early and leaves late. It blooms for months  in the spring and months in the fall; mid-summer it sulks and wishes it were north in a mountain glade. Each plant is short lived, but since it replaces itself so readily you are unlikely to notice this.  It is as good as a catmint or hardy geranium for underplanting larger, showier plants.

The nursery business has developed a slew of blue- and purple-flowered versions that are almost too lovely for words.  The bad news is that they are pretty finicky in our clay soil and high summer humidity. They are also expensive. I got a purple one, Blackberry Wine, to last for 3 years, but it never reseeded, which just did not seem right for a corydalis. There is a lovely, wispy biennial native form, Corydalis sempervirens, which has a pink and yellow flower and pines for mountain glades. There are also a host of yellow or white corydalis that the Brits grow as garden plants and which show up on sale from time to time. They are usually worth buying.
--------------------------------------

How to Corydalis.  Yellow corydalis or Corydalis lutea, likes semi-shade best. It will take full sun in spring as long as some foliage emerges above to provide relief during the hottest months. It can take full shade but does not like being directly under a tree or within the dripline of a house since it needs some moisture. It has an affinity for stone, liking soil a bit more alkaline than ours usually is. So if you have a wall, path, stairway, court, alley, well or edging in schist or slate, that is a great spot for it. The roots or corms (its rootstock looks like geraniums',) often break off, so transplanting is best done with tiny seedlings, not mature plants. And those tiny seedlings, once they come up in spring, will be large and billowing by fall. In fact, one is still blooming in a wind sheltered part of my garden.

Posted by Kay Wisniewski at 4:47 AM